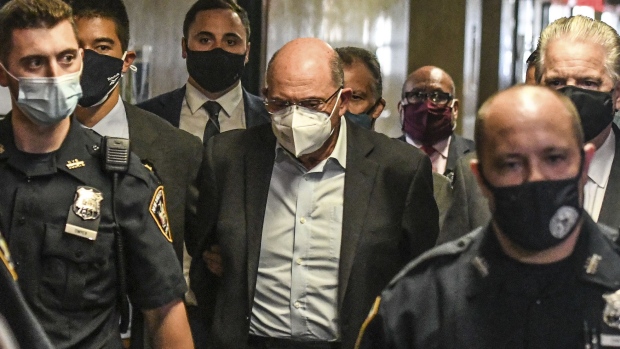 (Bloomberg) -- Getting Donald Trump’s longtime chief financial officer to turn on his boss may prove tough, as Allen Weisselberg’s unlikely to get a lengthy sentence even if convicted on tax fraud and other charges.

On paper, Weisselberg faces up to 15 years in prison for the most serious count in his July indictment. But several lawyers familiar with New York state prosecutions said that, if found guilty, the executive would more likely get as little as one year and no more than four, based on his lack of a criminal record and the amount of money at issue in the case.

Whether Weisselberg, 74, will make a deal with Manhattan District Attorney Cyrus Vance has been the question looming over the executive since he pleaded not guilty in July. Lawyers for Weisselberg, who on Monday has his first court appearance since his arraignment, have said he will fight the charges. One of those lawyers, Mary Mulligan, declined to comment for this story. Vance’s office also declined to comment.

“Allen Weisselberg has made the calculation that he can escape, or if he gets a jail sentence, he can get through it,” said New York defense lawyer and former federal prosecutor Adam Frisch, who is not involved in the case.

Vance’s office accused the company and its then-CFO of paying executives with perks like luxury housing and cars to help them avoid income taxes -- some $1.76 million over 15 years in Weisselberg’s case.

It’s long been clear that Vance would like Weisselberg’s cooperation in a broader case against the Trump Organization and, possibly, a historic and politically charged prosecution of a former president. But the district attorney’s leverage to get a plea deal may be limited by the relatively light sentence Weisselberg potentially faces.

Though many of the charges against Weisselberg carry substantial maximum sentences, state court judges have a lot of flexibility to impose far lower sentences. Samuel Buell, a former assistant U.S. attorney who now teaches at Duke Law School, said that means state prosecutors like Vance generally have a weaker hand in negotiating cooperation deals than their federal counterparts, who can count on strict sentencing guidelines to ratchet up the pressure.

To be sure, a judge could issue a tougher sentence. And even one year in state prison would still be a daunting prospect for a white-collar defendant, particularly a 74-year old. But it probably wouldn’t be the rest of Weisselberg’s life. And he would have to weigh that against the consequences of turning on the Trump Organization and Trump himself.

Weisselberg has worked for the Trumps for most of his adult life. A bookkeeper for the former president’s father in his early years, he was elevated by Trump two decades ago to CFO, a position that pays him $940,000 a year, according to the indictment. Turning on Trump would no doubt mean saying goodbye to all of that.

Phil Andrew, a former Federal Bureau of Investigation agent who now runs the Pax Group LLC, a consulting firm, said he doesn’t expect Weisselberg to flip on Trump for that reason. “He’s going to have to ride this in and demonstrate loyalty to end, because that’s his meal ticket,” said Andrew.

Frisch said Weisselberg would need to plead guilty as part of any cooperation deal, potentially exposing himself to lawsuits by Trump Organization creditors.

“It’s better for him to take the jail term than suffer the consequences to his bank account if he pleaded guilty,” Frisch said.

Weisselberg’s family is a potential pressure point for Vance. Though most of the perks detailed in the July indictment allegedly went to Weisselberg himself, his wife got her own Mercedes. His son Barry, also a Trump Organization employee, wasn’t identified in the indictment but was clearly referenced as a beneficiary of a rent-free apartment.

‘Man Without a Country’

A promise not to bring tax fraud charges against other members of his family could be part of any deal for Weisselberg’s cooperation. But Frisch said the financial harm Weisselberg’s family would suffer is a big reason for him not to make a deal.

“He has so much money, and there would be tremendous financial consequences to him and his family if he admitted guilt,” the lawyer said. “There comes a time in your life when the lives of your family and children are more important than your own.”

Defense lawyer Michael Bowe, who assisted Trump during Special Counsel Robert Mueller’s Russia investigation four years ago but has no involvement in the New York criminal case, questioned whether Weisselberg could move on if he turned on Trump.

“If you cooperate, you’re a man without a country,” said Bowe.

But Weisselberg may now be questioning whether continued loyalty will be rewarded, said John Moscow, a former senior white-collar prosecutor in the Manhattan district attorney’s office. Though still at the Trump Organization, Weisselberg was removed as CFO following the indictment, and he no longer serves as treasurer and secretary for many of the company’s subsidiaries.

“That’s a big change in his life, and if other people at the company are being told not to talk to him because they might be called to testify, that’s a change too,” said Moscow. “If I’m representing someone in that office, I would have to advise my client that someone like him may flip and may be wearing a wire.” Former Trump lawyer and fixer Michael Cohen, who pleaded guilty to federal charges in 2018 and has since become one of his ex-boss’s fiercest critics, said loyalty is a one-way street for Trump.

“The notion that Donald Trump will take care of Allen or any member of the Weisselberg family is comical,” said Cohen, who is now serving the final weeks of his three-year prison sentence in home confinement.

“For him to go to prison, expecting that Donald or the company would reciprocate upon his release, and ensure that his family is financially secure, is pure fantasy. Allen, of all people, knows this better than anyone else.”