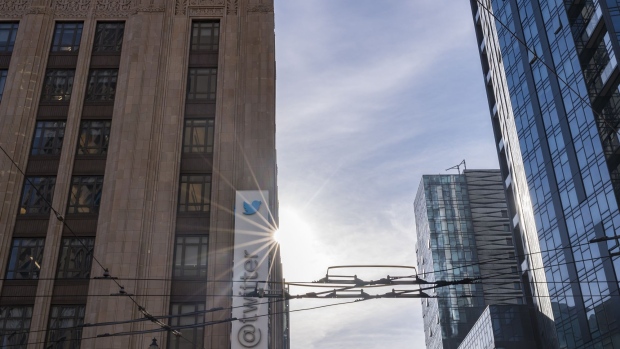 Twitter headquarters in San Francisco, California, US, on Friday, Oct. 28, 2022. Elon Musk told Twitter Inc. employees on Wednesday that he doesn't plan to cut 75% of the staff when he takes over the company, according to people familiar with the matter. , Bloomberg

(Bloomberg) -- The mass layoffs and constructive discharges that have hit  Twitter Inc. since  Elon Musk bought the company have impacted female employees to a significantly greater degree than male workers, a new class lawsuit charges.

That women were more affected by Musk’s immediately laying off more than half of Twitter’s workforce and his “quickly implemented new policies” is no surprise given his history of misogynistic comments, the suit filed Wednesday by Carolina Bernal Strifling and Willow Wren Turkal said.

They pointed to his “posted tweets on Twitter” that joked about naming a school using the acronym “TITS” and about women’s breasts. Musk tweeted just this week that testosterone rocks, and he “has been vocal about promoting women having a lot of babies,” the suit said.

The lawsuit is the latest challenge over working conditions at Twitter after Musk acquired the company. Twitter is currently facing lawsuits alleging it failed to give proper notice of layoffs to workers and contractors in violation of federal law and that Musk‘s demands that employees return to the office and work long, intense hours discriminate against disabled workers.

Roughly 2,621 of Twitter’s then 5,134 employees were told on Nov. 4 that they would be laid off, according to the new suit, which was filed in the US District Court for the Northern District of California. In the layoffs, 57% of female employees lost their jobs while just 47% of male workers lost their positions, the suit said. The job cuts resulted in “a great disparity in the layoff rates between women and men” in both engineering and non-engineering roles, the suit said.

The policies implemented by Musk that have forced female employees who weren’t laid off to quit include his expectation “that employees would work an unreasonable number of hours” and “be required to work out of physical offices,” the suit said.

The suit cites an immediate concern that laid off women will be forced to sign away their legal rights as a condition of receiving promised severance. Musk’s other company Tesla “recently engaged in mass layoffs without” the notice required by federal law, the suit said.

Strifling worked for Twitter from June 2015 until November, and Turkal worked there from June 2021 until November . They seek to represent a class of women “across the country” who experienced similar sex bias as well as a class of just California-based female employees.