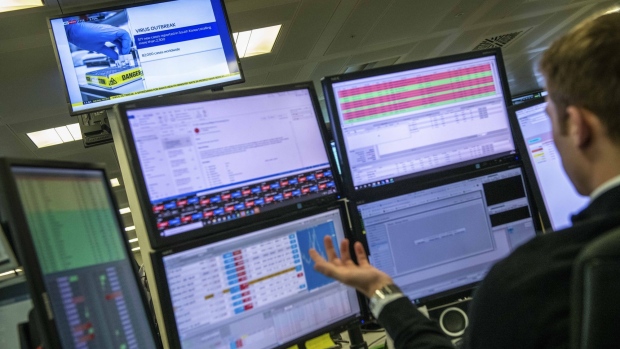 A television screen displays a news report about the coronavirus outbreak as a trader monitors financial data on computer screens on the trading floor at ETX Capital, a broker of contracts-for-difference, in London, U.K., on Friday, Feb. 28, 2020. Fear over the spreading coronavirus tightened its grip on global markets Friday, with stocks plunging across Europe and Asia a day after the worst rout on Wall Street since 2011. Photographer: Chris J. Ratcliffe/Bloomberg , Nishant Kumar

(Bloomberg) -- Eisler Capital, a $4.5 billion hedge fund firm, has struck a deal to acquire Neil Phillips’s Glen Point Capital in a rare consolidation in the industry.

The deal will bolster Eisler’s assets by $1.5 billion, bring in a new trading team and add three funds to aid the firm’s transformation into a multi-strategy investment platform. Financial details of the deal, which is expected to close by the end of March, were not disclosed.

Hedge funds, traditionally built around and by individual traders, have tended to shy away from mergers and acquisitions. But with rising pressure on fees, spiraling costs and a preference by many investors for larger, more established players, an increasing number of them are either shrinking or going out of business. A few are joining bigger platforms.

The two London-based firms both started in 2015 and trace their roots back to macro trading. Eisler has been expanding into other strategies in a bid to compete with industry giants such as Millennium Management and Citadel for capital and talent.

“This transaction will further expand our macro and emerging markets capabilities,” Ed Eisler, chief investment officer and founder of Eisler Capital, said in an emailed statement.

Phillips, who started Glen Point with his former BlueBay Asset Management colleague Jonathan Fayman and money from investors including billionaire George Soros, said he was looking forward to “capitalizing on all the benefits of joining a larger business.”

As part of the deal, the three Glen Point funds will continue operating and Phillips will also manage money for Eisler funds. A majority of Glen Point’s 31 employees are expected to join Eisler’s team of 124 staff.