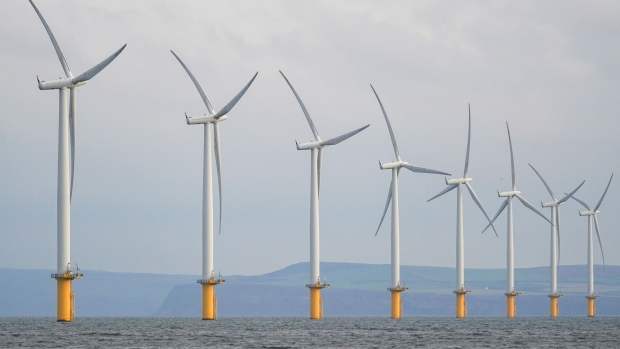 Offshore wind turbines at the Teesside wind farm near Redcar in Teesside, U.K, on Wednesday, Nov. 11, 2020. The U.K. economy expanded the most on record in the third quarter, a rebound that still leaves Britain's recovery trailing behind the world's major industrialized nations. , Bloomberg

(Bloomberg) -- Prime Minister Boris Johnson ramped up plans to build new nuclear power stations and offshore wind farms as he seeks to shore up the U.K.’s energy supplies in the wake of Russia’s invasion of Ukraine.

The strategy aims to eliminate British reliance on Russian hydrocarbons and push the country toward energy self-sufficiency, easing prices in the long-run. It comes just days after Britons were hit by a 54% rise in a price cap on energy bills, driven by a surge in wholesale gas prices exacerbated by the war in Ukraine.

“This will reduce our dependence on power sources exposed to volatile international prices we cannot control, so we can enjoy greater energy self-sufficiency with cheaper bills,” Johnson said in a statement late Wednesday from the Department for Business, Energy and Industrial Strategy.

But the document was immediately criticized by climate groups and opposition politicians as failing to bring down energy prices by taking insufficient action to spur onshore wind, solar power and energy efficiency.

Climate change research group E3G said there was too much emphasis on longer-term programs for nuclear power, offshore oil and gas and hydrogen.

“The focus should have been on rapid measures to boost energy security at home,”  said E3G Senior Policy Advisor Juliet Phillips. “By instead emphasizing on technologies which won’t deliver until far into the future, the government has both failed to meet the moment, and failed to read the mood of the nation.”

Measures in the strategy include:

The government said the fresh measures will support an additional 30,000 jobs in offshore wind, 3,000 more in hydrogen, and about 5,000 more in solar power.

The nuclear goals in particular will involve a significant change in pace of development of projects. A planned renaissance in the industry has stuttered over more than a decade as several projects failed to get up and running, and the only one being built has suffered repeated delays. At present all but one of the U.K.’s 11 reactors at five sites are due to close by the end of the decade.

Electricite de France SA is building a new plant at Hinkley Point in southwest England, and before Wednesday, the government’s plan was to agree by 2024 to build another large-scale nuclear plant, likely to be EDF’s Sizewell C. EDF is also considering extending the operating life of its Sizewell B station for another 20 years to 2055.

Under Johnson’s new plan, nuclear will provide 25% of the country’s power in three decades, up from 16% at present. The government will “work to progress a series of projects as soon as possible this decade,” including the Wylfa site in Wales, it said, adding the new plans could deliver as many as eight reactors.

Johnson had promised the document would be published “in the days ahead” in early March, but it’s been held up as his office and the Business Department wrangled with the Treasury over additional funding for nuclear power and energy efficiency measures. In the event, Wednesday’s announcement contained little new funding beyond some money for heat pumps and the nuclear fund.

The premier’s own Conservative Party is also split over deployment of onshore wind, described by some as an eyesore, and fracking for gas, which has been on hold since a test well was hit by small earthquakes in 2019.

Under the new strategy, authorities will consult on partnerships with “a limited number of supportive communities” over supporting onshore wind projects in exchange for lower energy bills, according to the statement.