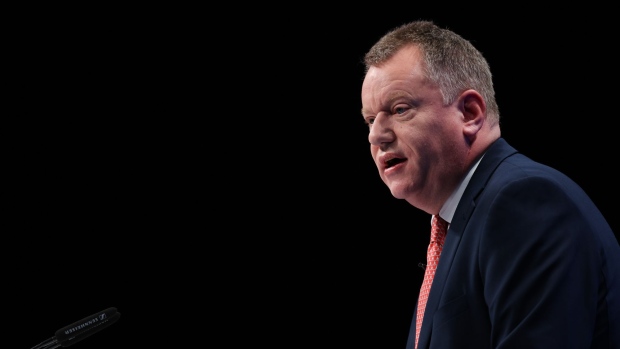 David Frost, U.K. brexit minister, delivers his speech on day two of the annual Conservative Party conference in Manchester, U.K., on Monday, Oct. 4, 2021. The U.K.'s governing Conservatives are meeting for their annual conference as the country grapples with a series of crises that threatens to undermine its economic recovery from the pandemic. , Bloomberg

(Bloomberg) -- The U.K. hit back at France over its threat to Britain’s electricity supplies in a dispute over fishing, escalating post-Brexit tensions between the two countries.

France is “unreasonable” to suggest Britain is not respecting their post-Brexit accord on fish, Brexit minister David Frost said Tuesday. Earlier, a French minister highlighted the U.K.’s reliance on France for its energy supply, suggesting it could be leveraged as a means of retaliation in their dispute over access to British fishing waters.

“We do not accept that we are not abiding by that agreement,” Frost said at the Conservative Party conference in Manchester. “It’s not really a fair reflection of the efforts we’ve made.”

The issue of post-Brexit fishing rights emerged again as a flashpoint in the difficult relationship between London and Paris last week when the U.K. granted just a fraction of the licenses that the French authorities had expected. The U.K. said the fishermen had failed to demonstrate they had a history of working in British waters. The French say the British are breaching the Brexit agreement.

France’s European affairs minister, Clement Beaune, said that the EU will take action in the next few days to increase pressure on the U.K., which is a net importer of power from France. Any interruption to those flows would threaten a British grid that is already under strain.

“The Channel Islands, the U.K. are dependent on us for their energy supply,” Beaune said in an interview on Europe1 radio. “They think they can live on their own and badmouth Europe as well. And because it doesn’t work, they indulge in one-upmanship, and in an aggressive way.”

Frost hit back at the comments, saying the U.K. had granted 98% of the requested licences to EU boats since Brexit, and that any retaliation from France would be have to be proportionate and agreed by other EU countries.