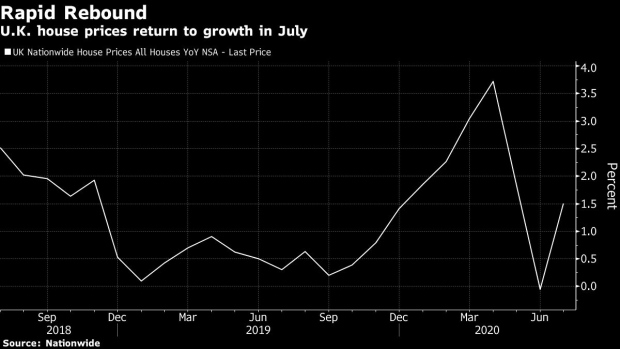 A sign in the window of a closed real estate agents explains the staff are working from home in London, U.K., on Tuesday, April 21, 2020. U.K. real estate agents called for help from the government as expectations for prices and market activity plunged. Photographer: Chris J. Ratcliffe/Bloomberg , Bloomberg

(Bloomberg) -- U.K. house prices rebounded in July as pent up demand helped support the market, according to Nationwide Building Society, which said the government’s stamp-duty cut will likely help boost value in the near term.

“The bounce back in prices reflects the unexpectedly rapid recovery in housing market activity since the easing of lockdown restrictions,’ said Robert Gardner, Nationwide’s chief economist. “The rebound in activity reflects a number of factors. Pent up demand is coming through, where decisions taken to move before lockdown are progressing.”

The housing market, which was all but shuttered for weeks during the nation’s lockdown, had been starting to show signs of strain, prompting Chancellor of the Exchequer Rishi Sunak’s decision to temporarily waive the tax on the first 500,000 pounds of any property purchase.

Nationwide said that could help bring some purchases forward, but cautioned against being overly optimistic, with the prospects of rising unemployment and the increasing unwillingness of lenders to take on risk, potentially acting as headwinds to future growth.

“There is a risk this proves to be something of a false dawn,” Gardner said. “Most forecasters expect labor market conditions to weaken significantly in the quarters ahead as a result of the aftereffects of the pandemic and as government support schemes wind down. If this comes to pass, it would likely dampen housing activity once again.”