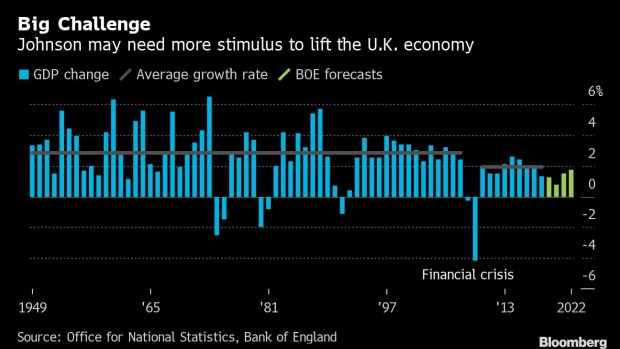 Scaffolding surrounds the clock face on the Elizabeth Tower, also known as Big Ben, at the Houses of Parliament in London, U.K., on Monday, Nov. 4, 2019. When Parliament dissolves on Wednesday, it will mark the official start of the general election campaign. Photographer: Jason Alden/Bloomberg , Bloomberg

(Bloomberg) -- Less than a month before a U.K. budget intended to set out Prime Minister Boris Johnson’s post-Brexit economic vision, the reset button has been hit.

The resignation of Sajid Javid, the man due to present what’s traditionally a closely watched piece of political theater, has upended economic policy. It calls into question the government’s fiscal prudence -- a long-standing trait of Johnson’s Conservative Party -- and even when the blueprint will be unveiled.

In short, it’s a mess. Javid quit as chancellor of the exchequer because he was asked to fire his most senior advisers. His position is second only to that of prime minister and enjoys a degree of autonomy. The interference suggests Javid’s reputation as a fiscal hawk clashed with a desire in 10 Downing Street for looser purse strings.

Now, with Johnson having greater control, an even more generous tax and spending program could be in the works. In a sign of just how much is up in the air, the prime minister’s own spokesman couldn’t confirm that the fiscal rules Javid himself had set would still apply. The March 11 budget might be deferred.

Anticipation that new chancellor Rishi Sunak, previously Javid’s deputy, will be less of a brake on spending ambitions prompted the pound to rally Thursday and pushed gilts lower.

The budget was already expected to deliver a fiscal stimulus, with more money for cash-strapped public services and billions of extra pounds for infrastructure to “level up” struggling regions.

Taken together, the infrastructure boost and an additional 12 billion pounds ($16 billion) for public services announced in September could deliver a stimulus of well over 1% of GDP in 2020-21. Excluding the financial crisis, that would represent the biggest fiscal loosening since the early 2000s when Tony Blair was prime minister.

Nabarro says new plans could include tax cuts, which would provide a much more immediate boost to the economy than investment projects.

RBS economists Cathal Kennedy and Peter Schaffrik agree that something more could be on the way.

“Why go through the trouble of reorganizing the workings of the Treasury and essentially push an unacceptable arrangement on the Chancellor, if there are no big changes planned, both in substance and in size,” they wrote.

Javid’s fiscal rules allow extra infrastructure spending but also require day-to-day public spending and revenue to be in balance within three years. That goal is much tighter than had been expected, and Javid had also asked ministers to find savings ahead of a spending review due this year.

Even before Thursday’s political shock, there were questions over how the government could fund its spending plans and meet targets. The National Institute of Economic and Social Research estimated a 10 billion-pound gap and said the framework may have to be revisited.

In his resignation letter, Javid said the Treasury must retain “as much credibility as possible.”

Sunak, who was chief secretary to the Treasury under Javid and previously worked at Goldman Sachs, has a very short timeframe if Johnson’s administration wants to recast the rules before its first budget.

“The new chancellor will want to put his own mark on the budget, leading us to believe it will be much more expansionary,” said David Zahn, head of European fixed income at Franklin Templeton. “This news also solidifies Boris Johnson’s position giving him more free reign to get things done.”

--With assistance from Joe Mayes, Robert Hutton and Andrew Atkinson.