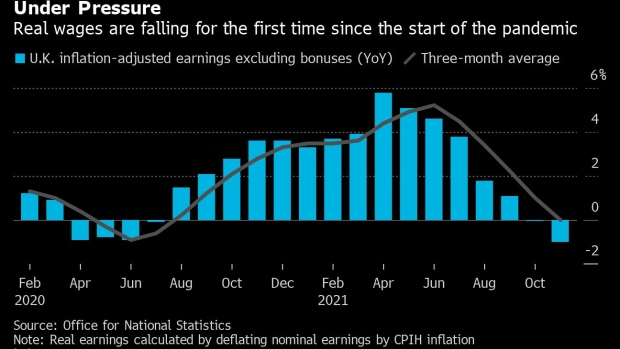 Morning commuters cross London Bridge towards the City of London, U.K., on Tuesday, Jan. 4, 2022. Bankers in London are expecting to start the year at home after the U.K. government recommended a shift to more remote work on Dec. 8, leaving the city quiet even before the Christmas break. , Bloomberg

U.K. workers were already seeing all of their wages swallowed up by inflation late last year, putting them on the back foot heading into a more severe cost of living crisis in 2022.

Average earnings rose 3.5% in November, below the rate of increase for consumer prices for the first time since July 2020, data from the Office for National Statistics shows. That left real average weekly earnings, a measure that captures the difference between pay and wages, down 0.9%.

The figures released Tuesday indicate that consumers are starting to fall behind in their spending power because of surge in inflation. That squeeze will become tighter in April, when increases in utility bills and taxes take effect.

“Pay is struggling to keep up,” said Jonathan Boys, labor market economist for the Chartered Institute of Personel Development, the trade group for human resources officials.

Inflation hit 5.1% in November, the highest in a decade, and is set to leap over 6% this year, which would be triple the rate the Bank of England targets.

That will be fueled by a 50% increase in natural gas and electricity prices due to hit consumer bills starting in April and a tax increase aimed at helping the Treasury pay for the costs of health care and the pandemic.

The drop in real wages also suggests an otherwise strong labor market is no longer delivering meaningful pay gains for workers, despite widespread shortages and record levels of vacancies.

Total wage growth is down from as much as 8.9% in May. That deceleration that might give Bank of England policy makers pause for thought as they consider the speed and extent of interest rate hikes needed to help bring U.K. inflation under control.