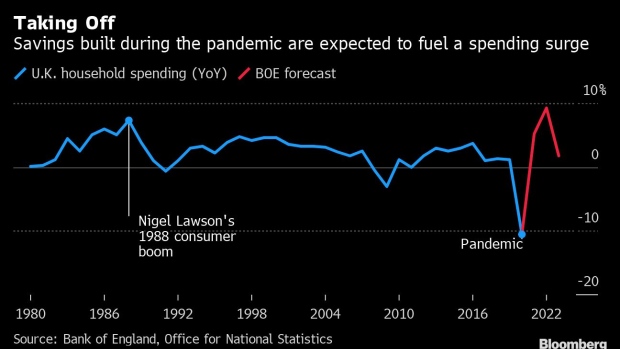 Apples for on display in Borough Market in London, U.K., on Thursday, June 17, 2021. U.K. Chancellor of the Exchequer Rishi Sunak said rising prices are one of his near-term concerns, as U.K. inflation surged unexpectedly past the Bank of Englands target for the first time in almost two years. , Bloomberg

(Bloomberg) -- U.K. retail sales fell unexpectedly in May as the government allowed restaurants and bars to reopen, prompting consumers to cut spending at supermarkets.The volume of goods sold in stores and online fell 1.4%, according to Office for National Statistics figures published Friday. That followed an unprecedented 9.2% surge in April, when non-essential stores welcomed back customers after months of lockdown to tackle the coronavirus. Economists had expected a 1.5% gain.

“Following a sharp increase last month coinciding with post-lockdown reopening, retail sales dipped slightly in May,” said Darren Morgan, director of economic statistics at the ONS. “However, they remain well above both their pre-pandemic levels and those seen in March before shops reopened.”

Food sales dropped a record 5.7% while shops selling household goods and garden equipment did well. Online sales declined for a third month as physical stores reopened but remain 60% higher than in February 2020 before the pandemic hit the U.K. Hospitality businesses were allowed to serve to customers outside from mid-April and indoors from May 17.

The figures add will do little to shift the impression that the U.K. is bouncing back strongly from its worst slump in three centuries. The recovery is being powered consumers, who built up huge savings in the absence of opportunities to spend while much of the economy was closed.

Their willingness to splash out drove inflation to its highest level in almost two years. The question is whether that can be sustained, and most surveys indicate strength.

The CBI, the nation’s biggest business lobby group, revised up its forecasts for growth this year to 8.2% from 6% and expects a 6.1% expansion in 2022, quicker than the pace predicted by the government’s Office for Budget Responsibility.

“There are really positive signs about the economic recovery ahead this year and next,” said CBI Director-General Tony Danker. “The data clearly indicates that there is pent up demand and ambition across many sectors.”

The Bank of England is optimistic, predicting the biggest spending boom since the 1980s when Margaret Thatcher was prime minister.

However, its forecast predated the government extending the final stage of lockdown restrictions in response to rising cases of the Covid-19 variant first detected in India. The risk is that consumers curtail their spending amid concerns that the rules could tighten.

The reopening of stores is a major boost for a part of the economy that has been harder hit than most. Footfall remains down on pre-pandemic levels, but less than 4% of the wholesale and retail sector is now furloughed, high-frequency data show.

(Updates with details from the statement from.)