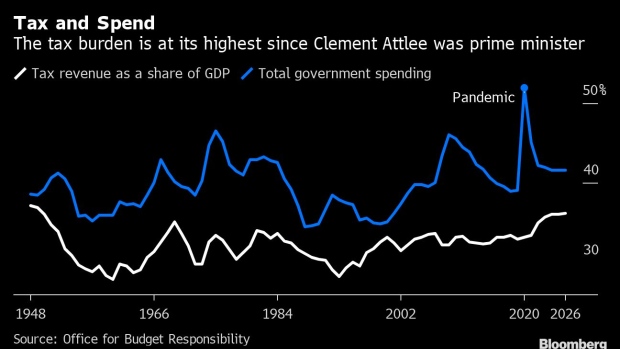 An electricity transmission pylon above residential houses in Brighton, U.K., on Thursday, Nov. 12, 2020. Brexit talks are going down to the wire, and the European Union's chief negotiator Michel Barnier is threatening British access to the continent's single energy market as a way of extracting concessions on fishing rights. Photographer: Chris Ratcliffe/Bloomberg , Bloomberg

(Bloomberg) -- Boris Johnson is on track to preside over a 3,000-pound ($4,130) increase in tax per household by 2027 under the government’s new vision of “big state” conservatism, according to the Resolution Foundation.

Chancellor of the Exchequer Rishi Sunak’s budget Wednesday included policies that reward low-income workers but increase taxes on middle and high-income households, the think tank said Thursday. Add in the impact of rising inflation, and household incomes are set to stagnate, Resolution said.

The moves, which came alongside big spending increases, will anger many Tory lawmakers, who favor low taxes and a smaller state. While Sunak has said he thinks there are limits to what the government can do, and insisted Thursday he was “uncomfortable” with the current tax level, his budget lifted tax as a share of the size of the economy to the highest since the early 1950s.

Sunak’s decisions, including the recent rise in National Insurance, a payroll tax, came despite a brighter economic outlook that dramatically improved the outlook for the public finances. Much of the extra money was used to boost funding for pandemic-ravaged public services.

That leaves the U.K. on course to become a high-tax economy, rather than the high-wage one promised by Johnson, Resolution said, predicting “the U.K. still in the midst of its weakest decade for pay growth since the 1930s.”

“Higher taxes aren’t a surprise given the U.K. is combining fiscal conservatism with an aging society and a slow-growing economy,” Resolution Chief Executive Torsten Bell said. “But it is the end of low tax conservatism.”