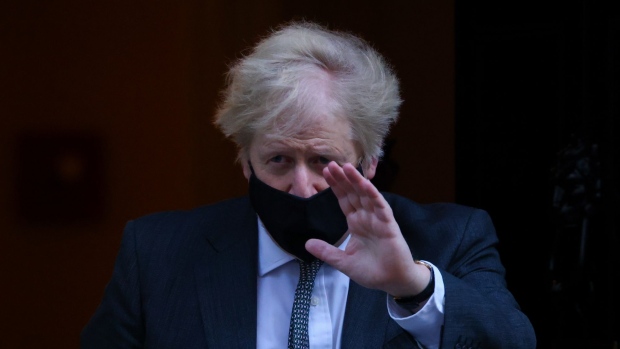 (Bloomberg) -- Prime Minister Boris Johnson said putting the world on a pathway to achieving net zero carbon emissions by 2050 is the main aim of the crucial round of United Nations climate change talks the U.K. is hosting in November.

Efforts to drive down fossil fuel emissions represent a “charter for jobs,” the premier told a committee of members of Parliament Wednesday. He said he’s “becoming more and more obsessed with what we can do” at the conference, known as COP26, which is scheduled to run Nov. 1-12 in the Scottish city of Glasgow.

“In getting to net zero by 2050, which is the number one objective of COP, and getting the world to agree to that, we have the opportunity to turbo-charge our economy at the same time and to drive jobs of all kinds,” Johnson said. For the U.K. that means “literally hundreds of thousands of jobs in wind technology, in batteries, in low carbon campaigns.”

Johnson’s goal looks challenging. While currently more than half of the world’s emissions are covered by net zero commitments, not all of them are for 2050.

China, the world’s biggest emitter, doesn’t plan to achieve climate neutrality until a decade later, while the U.S. has no such target after President Donald Trump pulled the second biggest emitter out of the Paris Agreement governing the global fight against climate change.

If President-Elect Joe Biden, who’s indicated he’ll rejoin Paris, makes the same pledge, some 63% of global emissions will be covered by net zero promises, according to Climate Action Tracker. As COP president, Britain is seeking firm commitments from India, Indonesia, Australia, Canada, South Africa, Brazil and Saudi Arabia among others.

The U.K. itself has already set the most ambitious interim goals of any major economy on the way to achieving net zero emissions by 2050. So far, some 26 countries have announced net-zero goals, including six countries that have passed binding legislation.

“Lots of countries that we thought would be difficult have been coming with commitments to net zero,” Johnson said. “We’re seeing an enormous amount of progress.”

For Johnson, the conference represents an opportunity for the U.K. to show global leadership now it has completed its departure from the European Union. He said he and COP President Alok Sharma, a member of the British cabinet, are scoping out the idea of holding a fringe event in Glasgow because “the appetite will be huge.”

“I want there to be the widest possible engagement with NGOs of all kinds, with civil society and everybody who has a stake in this,” Johnson told the House of Commons liaison committee. “I see no reason why there shouldn’t be a real festival of ideas in the run-up to COP.”

While COP conferences are usually held annually, the Glasgow conference was postponed from last year because of the coronavirus pandemic. Every few years, the conference takes on added importance as more than 190 countries push to increase the ambition of the fight against global warming, and this year’s talks mark one of those occasions.

At the last major round of discussions in Paris in 2015, envoys agreed to a long-term goal of limiting the temperature rise since pre-industrial times to “well below” 2 degrees Celsius, and preferably 1.5 degrees Celsius, with net zero to be achieved “in the second half of this century.”

The agreement’s two temperature targets would require the world to get there by around 2070 or 2050 respectively, according to UN scientists.