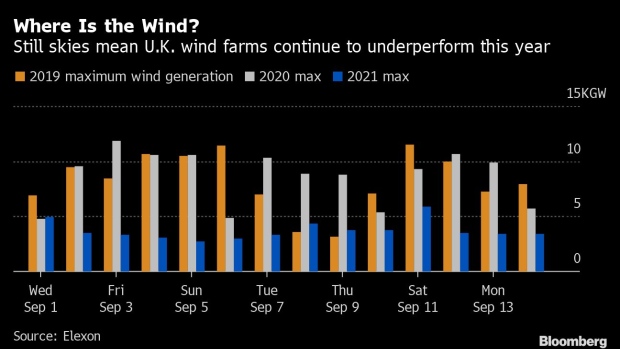 An electricity transmission pylon above residential houses in Brighton, U.K., on Thursday, Nov. 12, 2020. Brexit talks are going down to the wire, and the European Union's chief negotiator Michel Barnier is threatening British access to the continent's single energy market as a way of extracting concessions on fishing rights. , Bloomberg

(Bloomberg) -- Energy prices in the U.K. have broken records again this week in what’s becoming nearly a daily occurrence.

Gas and electricity prices surged as weak winds added stress to a market already faced with low fossil fuel inventories. Higher costs are hitting Britain just as the economy is recovering from the pandemic, fueling concerns about inflation as millions are set to face steeper bills this winter.

“This is truly unprecedented, but it hasn’t come out of the blue,” said Catherine Newman, chief executive officer of Limejump Ltd., a unit of Royal Dutch Shell Plc. “The market has been on the rise all year.”

Here are five charts that explain what’s really happening and why.

Power prices for next-day delivery in the U.K. climbed to an astonishing 424.61 pounds ($588.57) a megawatt-hour on the N2EX exchange on Tuesday. That’s 10 times higher than the average price in September 2020 and roughly quadruple the price at the beginning of the year. Even in the winter, power this expensive is unheard of in Britain and the fact that it’s happening during a mild September is a worrying sign going into the colder months.

At the heart of the energy rally is the cost of natural gas. Benchmark prices in the U.K. have almost tripled this year as flows from top suppliers Russia and Norway have been limited. Cargoes of liquefied natural gas are being redirected to Asia, leaving the U.K. and the rest of Europe struggling to rebuild depleted storage sites a month before the heating season starts.

The U.K. is increasingly reliant on renewable power generation and the wind just isn’t blowing. Even with more wind farms being built, generation has lagged recently. While wind is forecast to pick up on Friday, it will drop again over the weekend and remain low for much of next week. To make matters worse, two power cables that can send power from Ireland to the U.K. -- the Moyle and the East-West interconnectors -- are halted by the Irish grid operator. Ireland was the first country to warn of blackouts.

The U.K. can’t count on its nuclear fleet either. Electricite de France SA had five units offline on Tuesday, removing about 3,000 megawatts from available generation. An unplanned halt at one unit and extended maintenance at two others have reduced expected supply. By 2024 five of the U.K.’s eight nuclear plants will be halted permanently.

With weak winds and short gas supplies, Britain has turned to burning coal, the dirtiest of fossil fuels. The U.K. grid operator has called on a unit of EDF’s West Burton A coal station and two coal units at Drax Plc’s station to turn on to bridge the shortfalls. The units are normally shut, but can be available to National Grid to help meet demand. The nation plans to phase out coal by 2024.