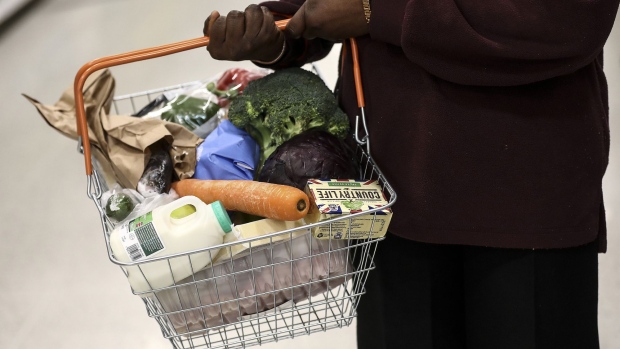 A shopper holds a basket of groceries inside a J Sainsbury Plc supermarket in Redhill, U.K., on Tuesday, March 27, 2018. Mike Coupe, J Sainsbury chief executive officer, spoke of the importance of having a strong online presence and improving efficiency to compete with Amazon. Photographer: Simon Dawson/Bloomberg , Bloomberg

The U.K. is about to ask how quickly it should fix one of its most controversial pieces of economic data, a measure of prices riddled with problems.

Chancellor of the Exchequer Sajid Javid will start a consultation in March on fixing the retail-prices index. That follows a decision last year to correct the flawed gauge by 2030, or possibly as early as 2025 based on the result of feedback.

The move will be another step in a long-running saga about a flawed statistic that’s used for the 453 billion-pound ($590 billion) inflation-linked gilt market, as well as setting increases for student loans and rail fares. With RPI 80 basis points higher, on average, than consumer-prices index, that means higher costs for rail commuters, while the state has to pay more to holders of linkers.

Data published Wednesday showed inflation on the RPI measure was at 2.2% in December, compared with 1.3% for CPI.

RPI has long lost its designation as a “national statistic” -- a form of quality mark -- and has been described as beyond saving by the U.K.’s top statistician. Bank of England Governor Mark Carney has also criticized its continued use.

The government has acknowledged that reform is needed, but won’t rush because of how RPI is “embedded across the economy.” The earliest date of 2025 has been set to allow “substantial time to prepare,” it said in September.

The consultation on RPI was due to begin this month, but has been delayed because of the election in December. It will now start on March 11 and run for six weeks. The government will respond to the feedback before Parliament’s summer recess.

To contact the editors responsible for this story: Simon Kennedy at skennedy4@bloomberg.net, Brian Swint, Paul Gordon