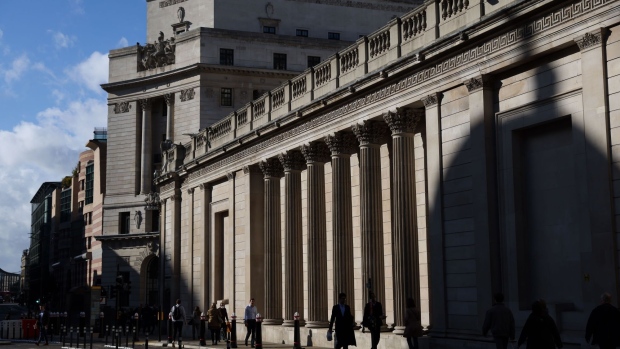 The Bank of England in the City of London, U.K., on Wednesday, Oct. 20, 2021. The U.K. Treasury is resisting pressure to increase spending in next week's budget because of concern that doing so would backfire by prompting the BOE to raise interest rates more aggressively. Photographer: Hollie Adams/Bloomberg , Bloomberg

(Bloomberg) -- The U.K. Treasury is close to appointing David Miles, a former Morgan Stanley economist and Bank of England rate-setter, to one of the nation’s most influential economic policy jobs.

Miles, a professor of economics at Imperial College London, is set to become head of macroeconomic forecasting at the Office of Budget Responsibility, which serves as Britain’s fiscal watchdog, according to people with knowledge of the matter who asked not to be named because the details are private.

The post is little known to the public, but the judgments and forecasts made by the OBR determine how much money the finance minister has to spend at the budget -- or how much tax needs to be raised.

Miles will take over from Charlie Bean, a former BOE deputy governor whose five-year term ends on Jan. 1. The Treasury and Miles declined to comment.

In October, new OBR forecasts handed Chancellor of the Exchequer Rishi Sunak an extra 38 billion pounds ($51 billion) a year to allocate. That’s more than twice than the projected revenue from a move to increase corporate tax to 25% from 19%. The headroom allowed Sunak to earmark 27 billion pounds annually to public services.

“Everybody in markets obsesses about monetary policy, but those are tiny changes compared to what’s going on in fiscal,” Bean, 68, said in an interview last month. “In many ways, our forecast ... is of far more profound importance.”

Miles’ appointment is expected to be announced before Christmas. He will report to Richard Hughes, a former Treasury official who is now chairman of the OBR. He will become the resident macroeconomic expert, making the big judgments on growth, inflation, unemployment and productivity.

Forecasts for government borrowing and public debt flow from those key judgements. They help determine how generous the chancellor can be while remaining within his fiscal rules.

Miles, 62, was a member of the BOE’s monetary policy committee between 2009 and 2015 after joining from Morgan Stanley. In 2004, he led a government review of the U.K. mortgage market, and in 2016, he completed a review for the U.K. Treasury on the government bond market.

During the pandemic, he wrote about the need for better analysis of the balance between the economic cost and the health benefits of lockdowns.