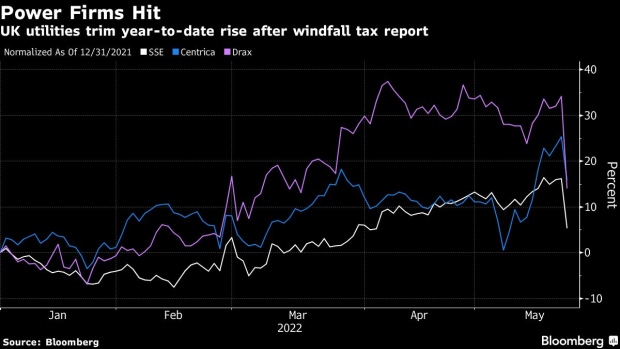 (Bloomberg) -- U.K. utility firms sank after the Financial Times reported that Chancellor of the Exchequer Rishi Sunak has ordered officials to prepare plans for a possible windfall tax on power generators as well as oil and gas firms.

SSE Plc fell as much as 11%, the most since the outbreak of Covid-19, while Drax Group Plc tumbled as much as 17% and Centrica Plc dropped as much as 9.3%. U.K. operators listed abroad also slid, with E.ON SE, Electricite de France SA and Iberdrola SA all declining.

Citigroup Inc. analyst Jenny Ping downgraded SSE to neutral from buy and Drax to sell from neutral. “The risk around UK windfall tax on the power sector including renewables companies is likely to overshadow the benefit of inflation and commodity prices,” she wrote in a note to clients.

The plans will target more than £10 billion ($12.6 billion) of excess profit for electricity generators, including wind farm operators, according to the FT, which cited unidentified government sources.