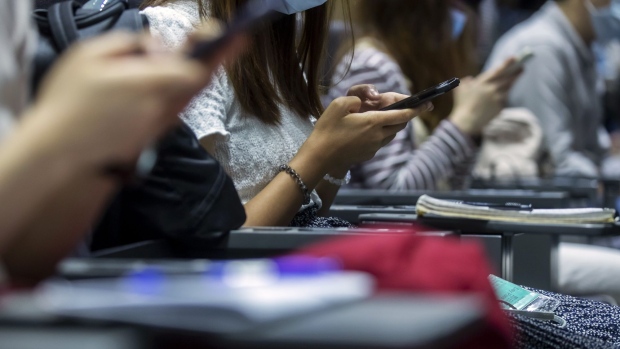 Members of the media attend a news conference with Hong Kong's Chief Executive Carrie Lam in Hong Kong, China, on Monday, June 21, 2021. Hong Kong will shorten hotel quarantine to seven days for fully vaccinated residents traveling from most places, as well as non-residents inoculated against Covid-19, in its most significant move yet to ease one of the strictest border curbs in the world. Photographer: Paul Yeung/Bloomberg , Bloomberg

(Bloomberg) -- The U.S. expressed concern over harassment and intimidation of foreign journalists in China, highlighting the difficulties they face while covering the world’s second largest economy.

Price added that such rhetoric was “leading to tense, in-person confrontations and harassment, including online verbal abuse and death threats of journalists simply doing their jobs.”

U.S. Secretary of State Antony Blinken separately raised the issue on Twitter, saying China “can and must do better.” Blinken’s No. 2, Deputy Secretary of State Wendy Sherman, brought up the concern in talks with Chinese diplomats in Tianjin earlier this week, Price said, calling on Beijing “to ensure that journalists remain safe and able to report freely.”

On Thursday, Chinese Foreign Ministry spokesman Zhao Lijian told a regular news briefing that the rights of foreign journalists operating in China were “fully protected.” Still, he declined to criticize reports of harassment of foreign journalists covering recent catastrophic flooding in Henan province and instead attacked reporting by the BBC.

“It smears China and violates its professional ethics,” Zhao said. “There is no such thing as love or hatred that happen for no reason.”