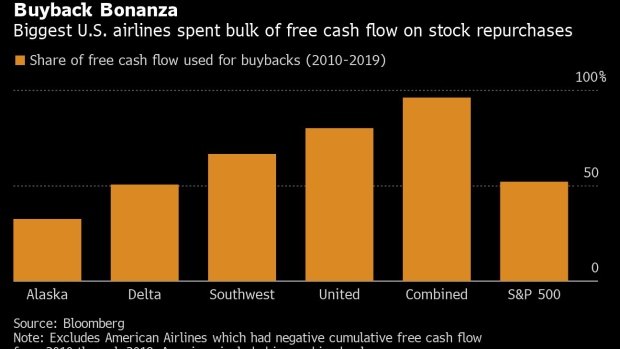 (Bloomberg) -- The biggest U.S. airlines spent 96% of free cash flow last decade on buying back their own shares. American Airlines Group Inc. -- which is not shown in the chart but is included in overall figures -- led the pack, with negative cumulative free cash flow during the decade while it repurchased more than $12.5 billion of its shares. United Airlines Holdings Inc. used 80% of its free cash flow on buybacks, while the S&P 500 Index as a whole allocated about 50% for the purpose. As the industry reels under the weight of the coronavirus outbreak corporate leaders are seeking federal assistance to ease the burden.

To contact the editors responsible for this story: Sophie Caronello at scaronello@bloomberg.net, Brendan Case