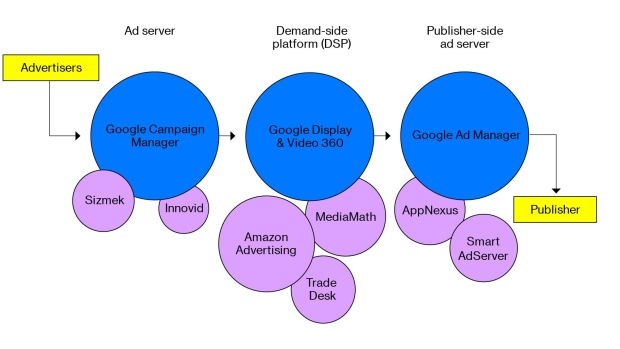 (Bloomberg) -- Government officials building an antitrust case against Google are investigating whether the company engages in tying, the practice of bundling different products together in a way that can block out competitors and give the seller an unfair advantage.

In recent months, the Justice Department and state attorneys general have asked executives at rival firms about the pricing and operations of Google’s Network division, according to people familiar with the discussions. This business sells services that handle almost every step a digital ad takes on its journey from a brand’s creative team to a consumer’s screen.

The inquiries focus on discounts, special features and other terms that Google offers to push advertisers and publishers to use only its products instead of mixing and matching with competing services. Regulators are also asking about how Google’s larger online search business interacts with the Network division to bolster its share of the digital ad market, the people said. They asked not to be identified sharing details of private discussions.

Tying makes the sale of one product conditional on the purchase of another product. This isn’t illegal, but if the strategy is used to cement a dominant market position, it could be, according to Gene Kimmelman, a senior adviser at think tank Public Knowledge and former chief counsel for the Justice Department’s antitrust division.

“If those tools are used to maintain a monopoly, prevent entry of new players and exclude rivals, then they may be antitrust violations,” Kimmelman said.

U.S. regulators are set to file a competition suit against Alphabet Inc.’s Google in the coming weeks, likely the largest monopoly case since the government sued Microsoft Corp. in 1998. That case initially focused on the concept of tying -- how Microsoft used its dominant Windows operating system to push customers to use its other products and elbow out alternatives.

Now the authorities are asking similar questions about Google. They have interviewed rivals as recently as July and have been asking questions as often as every month, with the inquiries becoming more detailed each time. Some respondents used white boards to sketch out the complex structure of the adtech market and Google’s operations, according to the people familiar with the discussions.

“While we continue to engage with ongoing investigations, the facts are clear: our digital advertising products compete across a crowded industry with hundreds of rivals and technologies,” said Google spokeswoman Julie Tarallo McAlister. “This competition has increased choice and helped reduce internet advertising prices, lowering costs for merchants and consumers.” A spokesperson for the Justice Department did not respond to a request for comment.

Google’s Network business generated more than $21 billion in revenue last year but it is growing slower than other parts of the company. Google often frames the business as an aide to web publishers that rely on digital ads. But critics say Google owns and exploits so much of the market that advertisers and publishers are forced to use more of its products.

U.S. investigators are looking at three broad categories in the adtech market: the “sell-side” software web publishers use to sell ads; the “buy-side” services marketers use to purchase those ads; and the exchange, which connects the two sides. Google owns tools that serve all these functions.

“The problem is Google controls all these entities,” Representative Pramila Jayapal, a Democrat from Washington, said during a July 29 congressional antitrust hearing. “It sounds a bit like a stock market, except, unlike a stock market, there’s no regulation on your ad exchange market.”

Government investigators have asked about how Google waives fees for publishers using its sell-side tools if they choose to auction their ad space on the Google ad exchange, according to people familiar with the discussions.

The regulators also inquired about Google’s decision in 2015 to limit ad-buying on its dominant YouTube video service to its own bidding tool, DV360, according to people familiar with the probe. Rival adtech companies say the move cut them off from a major source of valuable digital video ad inventory. Google says other social media sites work this way, and that competing ad-buying services, such as one from Amazon.com Inc., have grown without access to YouTube.

Competitors have also complained to investigators that Google has used its dominant online Search business to give its display advertising business an unfair advantage.

When an advertiser buys Search ads, Google gives them the option to shift any excess marketing dollars to display ads. That extra spending is then funneled into Google’s ad network and exchange. Many rival adtech companies can’t offer this.

Search marketing budgets are so huge that the extra money that spills over to Google’s display ads sometimes accounts for about 10% of web publisher revenue, according to one rival adtech executive who has spoken with the Justice Department about this. Multiple people cited this as a reason why most publishers must pay to be on Google’s ad exchange. “Google is where you have to be,” said Kimmelman. “There is no good alternative.”

A Google spokeswoman said web publishers can access this extra ad spending through other exchanges, but declined to say how many of these ads are sold outside Google’s platform.

For some critics, the larger concern is how Google passes information between its different arms in ways that is prohibited in other industries.

In the July antitrust hearing, Representative Jayapal used a theoretical situation: an electronics store wants to run an online ad with The Seattle Times, her hometown paper. Each part of the transaction passes through Google’s platform, which sees the supply of ad space, the demand for those spots, and sets the price and the bidding rules. Jayapal said this would not be allowed in financial markets, where these roles are often separated to avoid potential self dealing and conflicts of interest.

“If there were regulation, it would actually prohibit insider trading, which means the broker can’t use the data in the brokerage division to buy and sell for their own interests,” Jayapal said.

The U.K.’s Competition & Markets Authority shared Jayapal’s concern about Google’s conflicts of interest in a 2019 report. The regulator is mulling remedies that could include separating Google’s ad server, which plays a key role in the selection and pricing of ads, from the rest of the business.

At the congressional hearing in July, Google Chief Executive Officer Sundar Pichai dodged Jayapal’s questions about the company’s market share. Instead, he emphasized how much ad revenue Google shares with other websites. “It’s a low-margin business for us,” he said. “We do it because we want to help support publishers in this area.”

Yet the House hearing unearthed internal Google emails that drove home Jayapal’s point. In 2010, Google sales executives were debating how to handle an ad agency client that was using a “third-party bidder” -- a system from another provider that helped the agency bid on the right ads at the best prices. This meant Google couldn’t see how much the agency was planning to spend in upcoming quarters. “This is not an acceptable or scaleable solution,” Henrique de Castro, then a senior Google advertising executive, wrote.

In response, Neal Mohan, who oversaw Google adtech services at the time, said the company was creating its own bidding service. That would end up “substantially increasing” spending on Google once it had a combination of tools for bidding, buying and selling, Mohan wrote. Google was also considering buying a bidding tool, he added.

Soon after, it acquired Invite Media, a provider of ad-bidding software, and began integrating the technology into Google’s other offerings. When the deal was being finalized, Invite Media arranged its finances to avoid an antitrust review by the Federal Trade Commission.