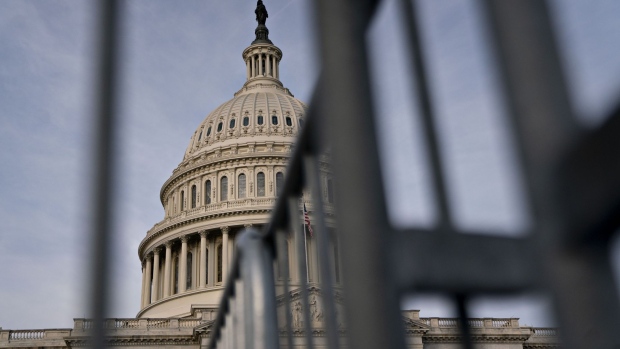 The U.S. Capitol stands past metal fencing in Washington, D.C., U.S., on Thursday, Jan. 2, 2020. House Speaker Nancy Pelosi and Senate Majority Leader Mitch McConnell are locked in a stare-down over the terms of President Donald Trump's impeachment trial, which carries political risks for both sides if it continues deeper into January. Photographer: Andrew Harrer/Bloomberg , Bloomberg

The U.S. budget deficit widened to US$356.6 billion in the first three months of fiscal 2020 as spending rose more than revenue, keeping the federal shortfall on pace to exceed US$1 trillion by year-end.

The gap increased 11.8 per cent from the US$318.9 billion in October-December of the previous year, the Treasury Department said in its monthly budget report Monday. Government outlays increased 6.7 per cent, while receipts rose 4.6 per cent. The U.S. posted a US$13.3 billion deficit in December alone compared with US$13.5 billion a year earlier.

Spending for mandatory programs like Medicare and Medicaid is expected to increase along with an aging population, and interest payments will form a greater share of total payments, according to the Congressional Budget Office, or CBO, a non-partisan government body.

Meanwhile, U.S. tariffs charged on imports from China and other nations increased by almost 20 per cent to US$21 billion in the first quarter of the fiscal year from the same period the previous year. The levies are paid by U.S. importers.

The fiscal deficit is set to surpass US$1 trillion in fiscal 2020, according to the CBO. That would be the highest since the financial crisis, when the government significantly boosted spending. As a share of gross domestic product, though, the total deficit will only be about 5 per cent, compared with double that in the recession.