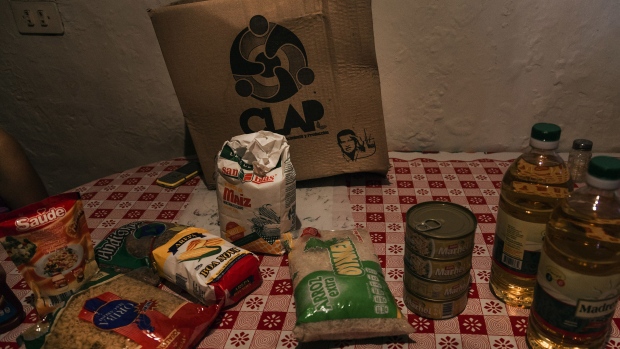 The contents of a bag from the government issued food distribution program, known by the Spanish acronym CLAP, sit on a table at a home in Caracas, Venezuela, on Thursday, Sept. 13, 2018. As the Venezuelan diaspora earns ever greater income, they're sending more to struggling relatives back home. Remittances surged to $1.5 billion in 2017 and will climb a further 60 percent this year to $2.4 billion, according to Caracas-based consultancy Ecoanalitica. Photographer: Adriana Loureiro Fernandez/Bloomberg , Bloomberg

(Bloomberg) -- A U.S. grand jury charged five people with money laundering in connection with an alleged graft scheme for $1.6 billion worth of contracts to provide food and medicine to Venezuela, the Justice Department said.

Three Colombians and two Venezuelans are accused of bribing Venezuelan officials to win inflated contracts to provide products to the government-run food and medicine distribution program, known as Clap, from 2015 to 2020, the Justice Department said in a statement.

One of the men, Alvaro “Cuchi” Pulido Vargas, 57, of Colombia, was previously identified as a business partner of Alex Saab, the ally of President Nicolas Maduro who was extradited from Spain to the U.S. this month to face money laundering charges in a separate case.

Saab and Pulido allegedly paid bribes to win contracts to import products through companies incorporated in Mexico, Venezuela, Hong Kong and Turkey, including milk, flour and rice for the program, U.S. officials have said. Saab, who is awaiting arraignment in Florida, has denied wrongdoing through his lawyers. Pulido could not be reached for comment.

Maduro’s government first launched the food distribution program in 2015 and it evolved into a widespread plan to feed the poor. It grew in importance and size during years of acute shortages, due to hyperinflation, plummeting local supply and government seizures of private companies.

The latest indictment accuses the five people of transferring about $180 million of proceeds through or to the U.S. In addition to Pulido, the Justice Department statement names Jose Gregorio Vielma-Mora, 55, of Venezuela; Emmanuel Enrique Rubio Gonzalez, 32, of Colombia; Carlos Rolando Lizcano Manrique, 50, of Colombia; and Ana Guillermo Luis, 49, of Venezuela.

They each face a maximum of 100 years in prison if convicted. None of them could immediately be reached for comment. The indictment was handed down by a grand jury in Southern District of Florida on Oct. 7 and unsealed Thursday, the Justice Department said.