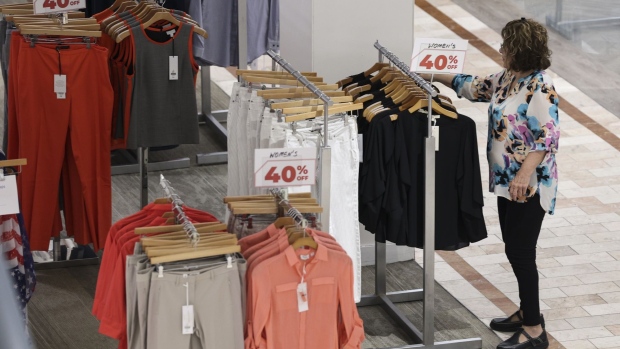 A customer shops inside a Shopper's Find location, a former Lord & Taylor store that went bankrupt last year, at the Willowbrook Mall in Wayne, New Jersey, U.S., on Monday, July 5, 2021. Shopper’s Find is sourcing directly from manufacturers or wholesalers stuck with piles of last season’s fashion and other extra goods as the retail industry regroups after the pandemic accelerated a monumental shakeout with more than 20 well-known retailers. , Bloomberg

(Bloomberg) -- U.S. consumer confidence decreased to a nine-month low in November as accelerating inflation and a pickup in Covid-19 cases weighed on Americans’ views on the economy.

The Conference Board’s index declined to 109.5 from a downwardly revised 111.6 reading in October, according to the group’s report Tuesday. Economists in a Bloomberg survey called for a drop to 110.9.

“Expectations about short-term growth prospects ticked up, but job and income prospects ticked down,” Lynn Franco, senior director of economic indicators at the Conference Board, said in a statement. “Concerns about rising prices -- and, to a lesser degree, the delta variant -- were the primary drivers of the slight decline in confidence.”

Bolstered by solid job growth, robust wage gains and record-high stock prices, consumer sentiment is well-above levels seen earlier in the pandemic. However, a resurgence in Covid-19 cases and the fastest inflation in decades has hampered a sustained recovery in Americans’ confidence.

“However, both confidence and spending will likely face headwinds from rising prices and a potential resurgence of Covid-19 in the coming months,” Franco said.

The group’s measure of current conditions fell to the lowest since April and future expectations also dropped.

While consumer confidence fell in the month, it’s still well above the average level over the last 10 years. That’s unlike the University of Michigan’s consumer sentiment measure, which fell to a decade low in November amid inflationary fears.

Part of the difference can be attributed to the Conference Board’s greater emphasis on views of the labor market. The share of consumers who said jobs were “plentiful” rose to a new record of 58%.

Consumers were less optimistic about their financial prospects and job outlook over the next six months. Fewer Americans also said they were planning to purchase homes, cars and major appliances over the same time period.

The figures come ahead of Friday’s November employment report, which is currently forecast to show the U.S. added more than half a million jobs in the month.