The fed was very slow to realize how serious inflation was: Former U.S. Fed head

U.S. inflation-adjusted consumer spending fell last month by the most since February, suggesting that Americans tempered their outlays amid the latest COVID-19 wave and the fastest inflation in nearly 40 years.

Purchases of goods and services, adjusted for changes in prices, decreased 1 per cent from November, the Commerce Department said Friday. 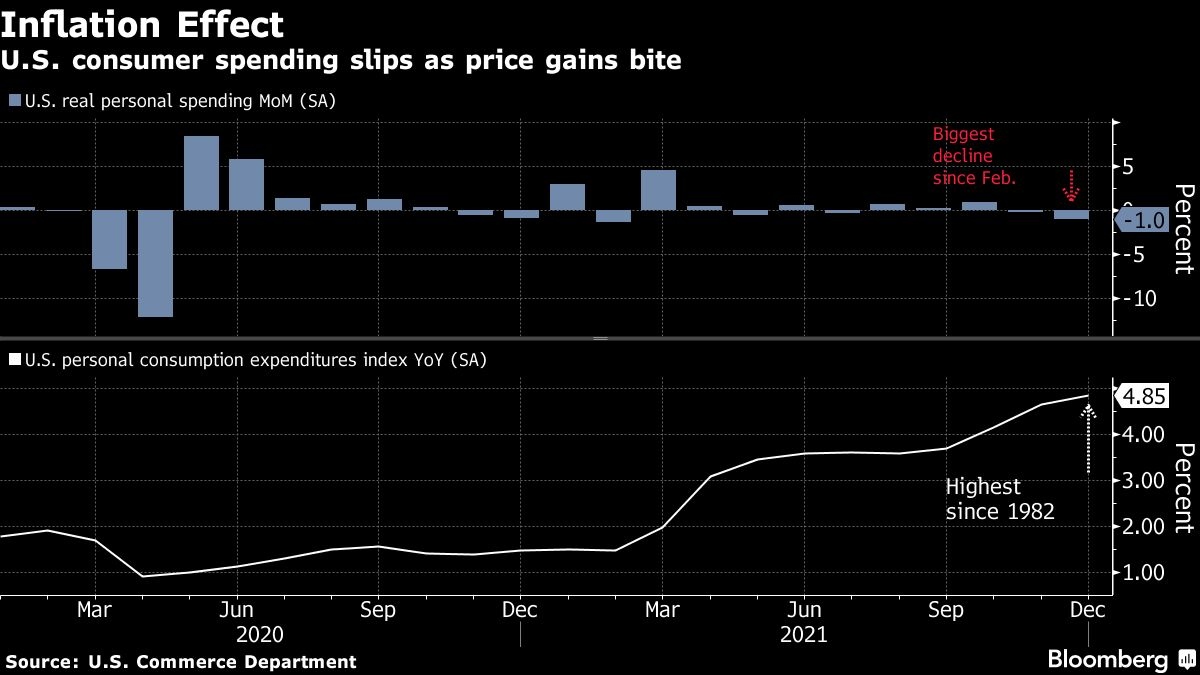 The personal consumption expenditures price gauge, which the Federal Reserve uses for its inflation target, rose 0.4 per cent from a month earlier and 5.8 per cent from December 2020, the most since 1982. Unadjusted for inflation, spending fell 0.6 per cent, while incomes rose 0.3 per cent.

In another sign of inflation pressures throughout the economy, a separate Labor Department report Friday showed U.S. employment costs rose at a robust pace for a second straight quarter, highlighting the rapid compensation gains seen in the second half of the year as businesses competed for a limited supply of workers.

The data come after the Fed, seeking to tame inflation and preserve the recovery, endorsed interest-rate liftoff in March and opened the door to more frequent and potentially larger hikes than anticipated following its two-day policy meeting on Wednesday.

A surge in coronavirus infections due to the omicron variant likely slowed spending in December as more Americans stayed home, and high prices were probably also a deterring factor. That impact could carry over to the beginning of the first quarter as economic activity remains subdued, though most analysts expect the slowdown to be short-lived.

Even though the latest data imply a sizable near-term drop in activity, we estimate the slowdown will be short-lived, with virus cases having already peaked. Robust gains in labor income will continue to support healthy gains in consumer spending as the year progresses.

“There’s a risk that the high inflation we’re seeing will be prolonged, there’s a risk that it will move even higher,” Chair Jerome Powell said during a press conference Wednesday. “We have to be in a position with our monetary policy to address all of those plausible outcomes.”

The median forecasts in a Bloomberg survey of economists called for a 1.1 per cent decrease in inflation-adjusted spending and a 5.8 per cent rise in the price index from a year ago.

A separate report Thursday showed personal spending grew 3.3 per cent in the final three months of 2021, led by a pickup in services outlays. Friday’s data for December suggest that consumer outlays were concentrated in the earlier part of the fourth quarter.

Inflation-adjusted goods expenditures slumped 3.1 per cent, while spending on services rose 0.1 per cent, according to Friday’s data.

The report also showed that personal incomes increased in December by a slower pace than 0.5 per cent in the prior month.

The saving rate -- or personal saving as a share of disposable income -- rose to 7.9 per cent, the second straight increase after declining for much of the year.

Wages and salaries advanced 0.7 per cent in December after an 0.6 per cent increase in the prior month as companies continue to raise pay to attract workers amid low labor supply.

The core price index, which excludes food and energy, rose 4.9 per cent from a year ago, the most since 1983. Price pressures are expected to remain elevated in the coming months before cooling later this year.