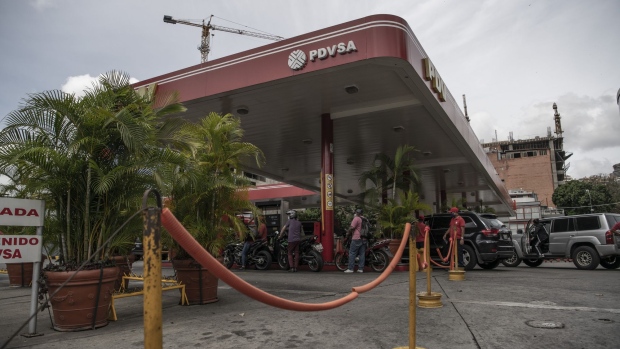 Vehicles wait in line to refuel at a Petroleos de Venezuela SA (PDVSA) gas station in Caracas, Venezuela, on Monday, June 1, 2020. Venezuela’s President Nicolas Maduro said fuel prices would increase starting in June, a historic policy shift after decades of subsidies that have allowed Venezuelans to essentially fill their tanks for free. , Bloomberg

(Bloomberg) -- A legal battle over a gasoline cargo turned over to the U.S. by a shipowner worried that it violated sanctions against Venezuela appears to have ended with a court-ordered sale.

The court decision caps a five-month odyssey that took the gasoline from Panama to Aruba, where the shipowner took over the cargo, to the port of Houston. The seizure of the cargo, believed to have been intended for Venezuela, demonstrates how far and wide the U.S.’s expanding net of sanctions stretches as it seeks to choke off most fuel transactions that could benefit Nicolas Maduro’s regime.

The ship’s owner, Brujo Finance Company, began to suspect the cargo would ultimately end up in Venezuela soon after the Alkimos was chartered by Sea Energy Company Inc. to carry gasoline from Panama to Aruba. The shipowner discovered the charterer intended to transfer the cargo onto another vessel, the Beauty One, which had been on service for Venezuela’s state oil company PDVSA in the past year.

That would have potentially put the ship owner in breach of U.S. sanctions, according to the legal complaint. On March 31, the owners told the charterer through brokers, “Owners WILL NOT participate in any illegal trading,” according to the complaint.

The shipowner alleged the charterer of the vessel, acting on behalf of the owner of the gasoline, ES Euroshipping AG, failed to provide an alternative port for discharge nor assurances that the cargo was not bound to Venezuela. Brujo then exercised a lien over the cargo and ordered the Alkimos to sail to the U.S., according to the documents.

The Alkimos arrived in Houston in June, ship-tracking data compiled by Bloomberg show. The court seized the cargo to satisfy the lien and offered the cargo for sale in a public auction in July. After the auction failed to attract bids, the court received a few private bids from little-known companies before Kolmar emerged as a potential buyer.

It’s unclear if the gasoline, which is currently at port under the watch of U.S. marshals, will be sold domestically or exported. Kolmar didn’t immediately return a call and email seeking comment.