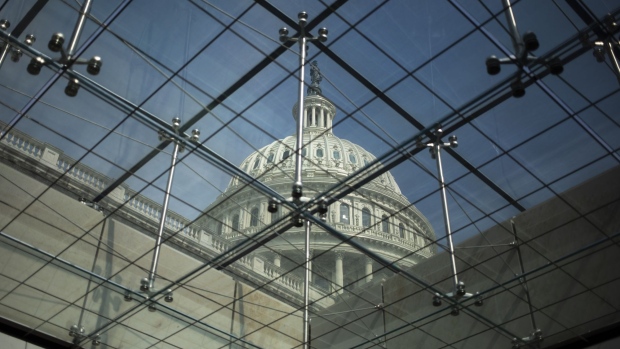 The U.S. Capitol building in Washington, D.C., U.S., on Thursday, July 22, 2021. Pelosi rejected two Republicans selected by the House GOP leader for a committee to investigate the Jan. 6 insurrection at the U.S. Capitol, sparking a threat by the chamber's top Republican to pull out of the inquiry entirely. Photographer: Tom Brenner/Bloomberg , Bloomberg

(Bloomberg) -- The U.S. debt ceiling officially became operative again on Sunday after a two-year suspension, with lawmakers in Washington yet to outline how they’ll avoid a potential default later this year.

The debt limit -- the total amount that the federal government is authorized to borrow -- was set at $22 trillion in 2019. It will adjust to the current level of debt -- which had risen to $28.5 trillion as of the end of June -- when the suspension ends, putting pressure on Congress to find a solution that will allow the government to keep borrowing.

“This is the day that the clock starts ticking,” said David Wilcox, senior fellow at the Peterson Institute for International Economics. “It’s the day that really begins to capture the attention of lawmakers to let them know that they need to come to the bargaining table. It’s a little bit like the starter’s gun in a 200-meter dash.”

The debt cap was paused for two years in August 2019, as part of a budget deal in Congress. Democrats, with a slim majority in both chambers, have yet to outline a plan to either increase the limit or suspend it again.

Without action, the U.S. is on a path to default as early as October. That outcome has been avoided in debt-ceiling crises since the 1980s, although the federal government has sometimes been forced to shut down until a deal could be reached.

The Treasury Department already started taking special measures on Friday to shore up cash. At noon that day, officials stopped selling State and Local Government Series securities, which help local authorities to invest bond proceeds. Other options for the Treasury include suspending new investment in funds for retired public-sector workers.

Before leaving for the August recess, Democrats last week said they would address the debt-ceiling problem, without giving details.

House Budget Committee Chairman John Yarmuth and Senator Dick Durbin, the No. 2 Democratic leader in the upper chamber, said there’s no concrete plan to approach the debt ceiling through budget reconciliation. That would bypass Republicans, but leave President Joe Biden’s party with sole ownership of a potentially unpopular move.

Other alternatives include negotiations with Republicans to increase the ceiling in return for agreeing to some of their favored budget items, or tying a rise in the ceiling to other bills that need to pass.