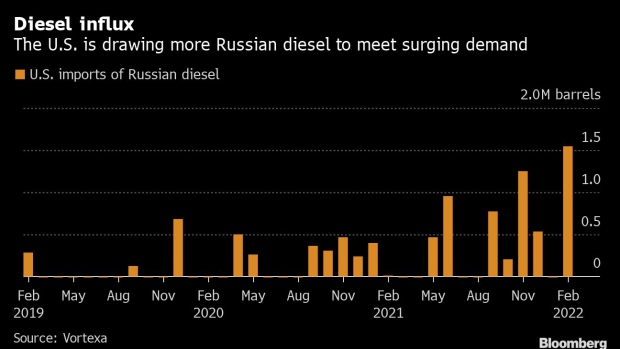 (Bloomberg) -- The U.S. is drawing more diesel from Russia this month than it has in at least three years as cold weather envelops the Northeast, driving up demand for the fuel used for heating and power generation.

About 1.55 million barrels of diesel is en route from Russia to the U.S. for February arrival, the highest record in data going back three years, according to oil data provider Vortexa.

The Russian cargoes are arriving as East Coast inventories drop to the lowest seasonally since 2014 and demand for the fuel is at a three-year high. The growing proportion of Russian imports is another illustration of the nation’s critical role in supplying the world with oil. Geopolitical tensions have markets on edge as the U.S. has said it will respond with sanctions if Russia invades Ukraine, a move Russia has said it isn’t planning to make.

The U.S. East Coast is especially reliant on imported diesel because refining capacity has shrunk in recent years due to poor margins and an explosion. The Northeast is using the most fuel for power generation since 2018 as cold weather drove up natural gas prices.

The other main suppliers to the U.S. are facing problems of their own - Europe is grappling with its energy shortage and refinery outages while Canada was forced to shut an east coast refinery early in the pandemic.