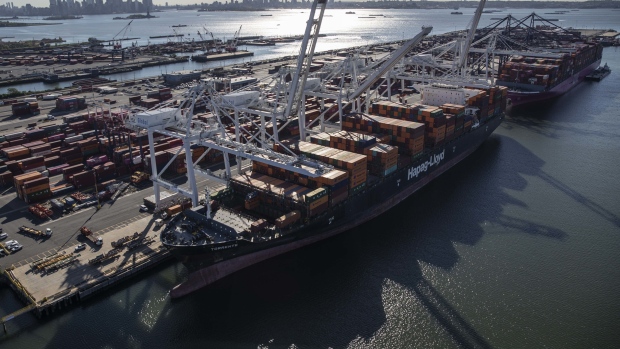 (Bloomberg) -- A disagreement among European Union countries means a pivotal trade meeting with the U.S. this week will be narrower in scope than originally planned and the contents of a joint statement outlining the results are still up in the air.

During a meeting of EU ambassadors on Monday, France wouldn’t agree to the draft conclusions for the trade and technology council meeting with the U.S. planned for Sept. 29 in Pittsburgh, according to officials familiar with the talks.

EU diplomats expect an updated draft to be sent around Monday evening, according to another official.

The meeting was planned as a reconciliation between the EU and the U.S. after four years of transatlantic conflict with former President Donald Trump. The four main topics to be discussed are screening foreign investments, export controls, semiconductor supply chains and artificial intelligence.

The French earlier sought to postpone the meeting in the aftermath of the announcement that Australia had inked a new defense pact with the U.S. and the U.K., which scuttled a contract France had to supply nuclear-powered submarines to Australia.

Another EU diplomat said several countries have pushed for changes to the draft document, including ones aimed at protecting the EU’s regulatory autonomy from U.S. influence.

The latest version of the TTC conclusions watered down the scope of the discussion on semiconductors, and would only focus on short-term supply chain issues, according to a copy of the draft conclusions seen by Bloomberg.

“This partnership should be balanced and of equal interest to both sides,” the draft said. “It will initially focus on short-term supply chain issues. Cooperation on mid- and long-term strategic semiconductor issues will begin in the relevant TTC working groups ahead of the next TTC meeting.”

At least one member state complained that the text was getting weaker with each new iteration, according to one of the officials, who asked not to be identified because the discussions are private.

Negotiations among the member states are ongoing in an effort to agree to a statement before the meeting.