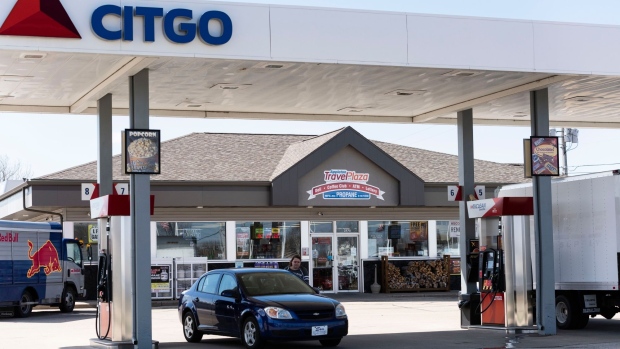 Vehicles refuel at a Citgo Petroleum Corp. gas station in Appleton, Wisconsin, U.S., on Tuesday, April 20, 2020. Of all the wild, unprecedented swings in financial markets since the coronavirus pandemic broke out, none has been more jaw-dropping than Monday’s collapse in a key segment of U.S. oil trading. Photographer: Lauren Justice/Bloomberg , Nicolle Yapur and Fabiola Zerpa

(Bloomberg) -- The U.S. Treasury Department banned transactions of a key bond issued by Venezuela’s state-owned oil company for one year, the longest since it first stepped in to shield its U.S.-based refining arm from creditors, amid its economic downfall and political crisis.

U.S. administrations under Donald Trump and now Joe Biden, had previously extended the ban for shorter periods -- 90 days each -- consecutively, as claims from bondholders and creditors over Petroleos de Venezuela SA’s main asset in the U.S., Citgo Petroleum Corp., piled up in courts.

Venezuela’s opposition, which under Juan Guaido has sought to avoid losing control of Citgo while mounting a challenge to the country’s socialist regime, celebrated the move.

“This is the largest license extension granted so far to protect and preserve Citgo,” said Guaido’s representative in the U.S., Carlos Vecchio, on Twitter. “We thank the Joe Biden administration for this important step in favor of the Venezuelan people.”

The new one-year ban took force Thursday with the Treasury Department’s Office of Foreign Assets Control issuance of a 5I license that will be in effect until Jan. 20, 2023. From then on, bondholders of the PDVSA 8.5% note due 2020, backed by half of Citgo’s shares, will be allowed to engage in transactions to collect on the collateral unless the Treasury Department decides to extend the prohibition.

Venezuela defaulted on its debt in 2017. Renegotiation efforts are mainly blocked by U.S. sanctions that forbid any dealings with the Venezuelan government. Other creditors, such as mining company Crystallex International Corp. and oil company ConocoPhillips, are also after the sale of Citgo to satisfy awards they won against Venezuela for the expropriation of their assets in the country.

“This move certainly makes it clear that the U.S. government still has Guaido’s back and will give him another chance at negotiating with it’s main creditors,” said Guillermo Guerrero, a strategist at London-based Emfi Group Ltd. “The question is whether Guaido can make an offer that is interesting enough to entice bondholders.”