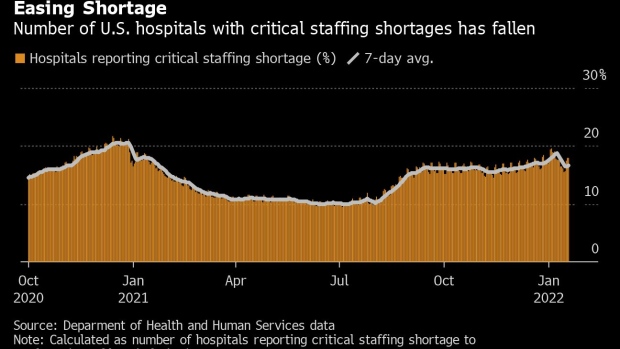 Healthcare workers treat a patient on the Covid-19 ICU floor of the University of Massachusetts (UMass) Memorial Hospital in Worcester, Massachusetts, U.S., on Monday, Dec. 27, 2021. On Friday, the Massachusetts Department of Public Health reported 10,040 new confirmed Covid cases, marking the third consecutive day that a record was set for most cases in a single day in the state. , Bloomberg

(Bloomberg) -- The U.S. hospital-staffing shortage exacerbated by the latest Covid-19 wave is showing signs of easing, but many West Coast and rural states are still seeing the worst of it. San Francisco’s infections are falling rapidly from a peak a week and half ago.

France will relax some restrictions early next month in a bet the pandemic will recede thanks to faster inoculations and plans to shut the unvaccinated out of most social activities. Austrian lawmakers passed the European Union’s first law making coronavirus vaccinations mandatory.

Hong Kong added 50 new locations -- including the airport, shopping district and one of the city’s best-known noodle houses -- where mandatory tests are required for visitors to these sites. The sites are linked to an outbreak health officials believe started with pet hamsters.

Nearly half of Covid-positive patients in Massachusetts are hospitalized with Covid rather than for the virus, according to new state data.

Massachusetts is among several states trying to distinguish between patients with serious Covid and those with “incidental” Covid -- who test positive but are hospitalized for other reasons -- in order to capture a more accurate picture of the toll the virus is taking.

Massachusetts data counts doses of dexamethasone, a steroid used to treat Covid, as an imperfect but indicative measure of serious cases of the virus. In the state’s first publication of those numbers, it reported Thursday that among 3,192 hospitalized Covid patients statewide, just under 48% came in for other reasons.

The Biden administration is monitoring real-time data obtained from businesses operating in China to determine whether outbreaks of the omicron variant of coronavirus pose a risk to U.S. supply chains, an administration official said.

It’s too early to tell whether there will be any impact on the American economy from the variant’s spread in China or from aggressive efforts by officials there to stamp it out, the official said.

Covid-19 vaccinations won’t affect a couple’s chances of conceiving a child, but an infection of SARS-Cov-2 can temporarily diminish male fertility, an NIH-funded study found.

The study, published Wednesday in the American Journal of Epidemiology, marks the latest effort to show that the vaccines can help avert the risks Covid-19 poses on pregnancy or the baby.

San Francisco’s infections are falling rapidly from a peak a week and half ago, the city’s department of health said Thursday. The seven-day average of cases has dropped to about 1,076 per day from 2,164 on Jan. 9, while hospitalizations are also expected to peak in the next few days at a level that’s within the health system’s capacity.

Mayor London Breed said the city’s response to the omicron-fueled surge demonstrates it can handle large outbreaks while keeping schools and the economy open.

“We know that this virus will be with us for the foreseeable future, but we have the tools in place and the experience managing Covid to not let it completely upend our lives,” she said in a statement.

Hong Kong added 50 new locations -- including the airport, shopping district and one of the city’s best-known noodle houses -- where mandatory tests are required for visitors to these sites.

The move came after officials said they were more confident about links between pet hamsters and Covid in the city. “Given some of the hamster samples of a pet shop collected earlier were tested positive, four specified premises are included in the compulsory testing notice,” the government said, adding to an earlier list of pet stores.

The venues were listed with specific times where visitors may have been exposed to those infected. The city is one of the last places in the world still strictly adhering to the Covid-Zero approach.

France will relax some Covid-19 restrictions from early next month in a bet the pandemic will recede thanks to faster inoculations and plans to shut the unvaccinated out of most social activities.

The French government will lift the obligation to work from home at least three days a week from Feb. 2, Prime Minister Jean Castex said Thursday. It will also remove a requirement to wear a mask outdoors and scrap attendance limits for sports arenas and cultural venues.

Infections with the delta variant are “clearly receding,” while the spread of the less-dangerous omicron variant has already peaked in some regions including Paris, Castex told reporters in the French capital.

The U.S. hospital-staffing shortage exacerbated by the latest Covid-19 wave is showing signs of easing, but many West Coast and rural states are still seeing the worst of it.

Over the past seven days, about 16.7% of U.S. hospitals have reported critical staffing shortages, down from a recent peak of 18.7% on Jan. 9, according to data from the Department of Health and Human Services. Fewer facilities are reporting shortages in populous New York, Florida and Illinois.

The numbers are still concerning to state leaders, but are at least returning to the levels seen in October and November, before the omicron spike.

The parliament’s lower house approved the policy on Thursday with additional support from most deputies in two opposition groups. The far-right Freedom Party rejected the plan.

The mandate will come into force next month, and officials will start imposing fines as high as 3,600 euro ($4,084) for dissenters from mid-March.

Evidence of omicron appeared in U.S. sewage samples collected as early as Nov. 21, state and local health officials from California, Colorado, Houston and New York City said in a study published by the U.S. Centers for Disease Control and Prevention. The first infection in a U.S. patient was confirmed on Dec. 1 in California.

“The findings give strong early evidence that the omicron variant was likely present or more widely distributed in these communities than originally indicated by clinical testing alone,” the authors said in CDC’s Morbidity and Mortality Weekly Report.

Signs of the omicron variant that’s fueling a worldwide surge in Covid-19 cases were present in the U.S. a week or more before it first appeared in California, and spread widely in the weeks afterwards, according to a study showing the power of wastewater analysis for tracking outbreaks.

Dayton Children’s Hospital in Ohio treated a record number of Covid-19 patients, most of them unvaccinated, the Dayton Daily News reported.

Of the 60 children treated last week, 20 were in intensive care, the newspaper reported. Children in the U.S. have been hospitalized at a higher rate during the surge of the omicron variant compared with previous viral waves, the Centers for Disease Control and Prevention says.

Ontario Premier Doug Ford said the government will begin to ease restrictions in Canada’s most populous province at the end of January, as the worst of the omicron wave appears to be over. He also laid out a plan to further loosen measures over the next two months.

On Jan. 31, limits on social gatherings will be raised to 10 people indoors, 25 outdoors. Capacity limits for indoor settings including restaurants, stores, malls and meeting spaces will be increased or maintained. Concert and sporting venues can operate at 50% capacity or 500 people, whichever is less.

Israel will give a third Pfizer-BioNTech dose to at-risk children ages 5 to 11, as omicron continues to spread, the Health Ministry said. The decision would apply to fewer than 200 children, according to Haaretz.

Separately, the country will from next Thursday exempt schoolchildren from quarantine if they are exposed to a Covid carrier but show no symptoms, Haaretz and Army Radio reported. The students will be tested on the day of exposure and again three days later, without any requirement to quarantine during that time. About 100,000 students across Israel are currently in isolation, significantly higher than in previous waves, Haaretz said.

The risk of ending up hospitalized after a Covid-19 infection is 36% lower for people who were exposed to the omicron than the delta variant, according to a study from Danish health authorities in Denmark.

The study showed that 0.6% of those infected with the new variant were admitted to hospital, compared with 1.5% of those who tested positive for delta.

Vaccinations administered to children during the previous three months provide strong protection against the omicron variant, according to Israeli researchers.

Children aged between 5 and 11 were twice as protected as those not vaccinated, and those between the ages of 12-15 were four times better off, according to their study.

The 12-15 year olds boosted in the past month or two were best protected, whereas those who had two doses more than five months ago weren’t much better off than their non-vaccinated peers.

Citigroup asked its London staff to come into the office at least three days a week.

“We are now free to gather in our offices, without restriction, where we are better able to generate the energy and collaborative spirit on which Citi thrives,” EMEA Chief Executive Officer David Livingstone and U.K. head James Bardrick said in an email to staff seen by Bloomberg.

Ireland’s government will end an 8 p.m. curfew for bars and restaurants by the end of next week, allowing them to stay open until midnight, the Irish Independent reported, without saying where it got the information.

Other restrictions on the hospitality sector, live events and order to work from home advise will be relaxed in coming weeks, the newspaper said. Cases numbers in Ireland are dropping, and hospitalizations have remained relatively low in the latest wave.

There were 133,536 new infections in the 24 hours through early Thursday, after they exceeded 100,000 for the first time the previous day, according to data from the RKI public-health institute. The seven-day incidence rate per 100,000 people climbed to 638.8, also another record.

Health Minister Karl Lauterbach reiterated that he expects infections to peak around mid-February.