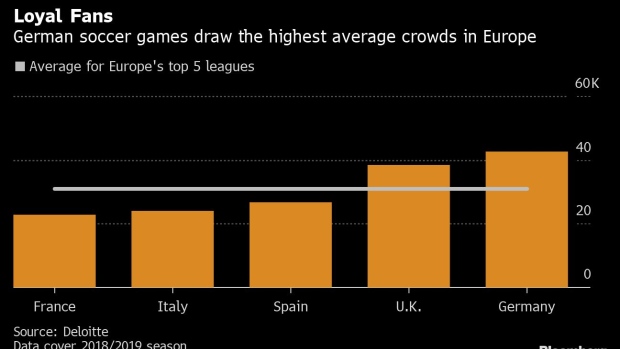 (Bloomberg) -- American money is starting to chase German soccer, where strict ownership rules have for decades favored spectators over speculators.

Sensing an opportunity to tap into one of Europe’s richest leagues and undeterred by a fanbase that has sometimes been resistant to wealthy owners, U.S. businessmen Paul Conway and Jordan Gardner are among those eyeing deals. Their interest comes with clubs including Eintracht Frankfurt and SC Paderborn 07 opening up to the possibility of external investment.

Even before the coronavirus crisis shut down arenas and sent soccer clubs searching for ways to shore-up their finances, those in Germany were looking for ways to start bridging the money gap with rivals in the U.K. and Spain.

“Germany is interesting to us strategically,” Conway, the co-founder of investment firm Pacific Media Group, said in a phone interview. “We have approached a number of clubs to see if there’s a shared philosophy and to see if we can be helpful.”

The Bundesliga is home to greats of the global game, including Robert Lewandowski, and rising stars like Erling Haaland. Its clubs, such as FC Bayern Munich, Borussia Dortmund and FC Schalke 04, are known for their passionate fanbases. Bundesliga games have the highest average attendances across Europe’s top five leagues, according to Deloitte.

Conway said teams in the country are a good fit for his firm’s existing stable of lower-league European soccer clubs, which it manages with a focus on developing young talent and a more exciting, attacking style of play.

“Many teams play with a high press, they have balanced budgets and have a commitment to youth,” according to Conway, who said Pacific Media could make more than one investment in Germany.

Among those weighing outside money is SC Paderborn 07, according to people familiar with the matter. The second-division German team has held discussions with at least one American group, the people said, asking not to be identified discussing confidential information.

Eintracht Frankfurt, one of Germany’s best-known teams, has also been exploring the possibility of introducing new investors, people familiar with the club’s thinking said. It has held preliminary talks with bankers on its potential value in any minority stake sale, one of the people said. The club’s board hasn’t made a formal decision on whether to pursue a deal, another person said.

Representatives for Eintracht Frankfurt and SC Paderborn 07 declined to comment.

Last year, an international investor group approached third-tier club TSV 1860 Munich about buying a majority stake, according to a person familiar with the matter. The consortium hasn’t reached an agreement with the club’s main investor, the Jordanian businessman Hasan Ismaik, the person said.

A representative for TSV 1860 Munich declined to comment, referring questions to Ismaik. Attempts to reach Ismaik through TSV 1860 Munich and another company he owns were unsuccessful.

“Many, including myself, see Germany as an untapped, potentially lucrative market,” said Gardner, an American soccer executive who has minority investments in the U.K.’s Swansea City AFC and Dundalk FC in Ireland, and is majority shareholder in Denmark’s FC Helsingor.

Clubs in the top two Bundesliga divisions generated revenue of about 4.5 billion euros ($5.3 billion) during the 2019/2020 season, 5.7% less than the previous year, according to figures from DFL. The German sporting body warned that the impact on the most recent season would be even more pronounced as a result of ongoing stadium lockdowns.

“Covid will have an impact on the ownership structure of German teams in the long term,” said Daniel Erd, a lawyer at Pinsent Masons in Germany. “In the end they won’t find a long-term solution apart from external investment.”

Since 1998, the so-called 50+1 rule has prevented a commercial investor from holding more than 49% of voting shares in any German club. The edict has been credited with keeping wage bills and ticket prices in the country low compared with other major European leagues, where super-rich investors have poured millions into buying players but presided over rising costs for fans.

“The 50+1 rule model ties the soccer industry a little bit to the regular fans through a membership-owned system,” said Tilo Zingler, the founder of an official Borussia Dortmund fan club in the U.S. “As a fan, I can have my say.”

There are outliers. VfL Wolfsburg is owned by car giant Volkswagen AG, and Bayer 04 Leverkusen by pharmaceuticals group Bayer AG. These clubs are exempt from 50+1 as their owners have invested consistently over more than two decades. Another is TSG 1899 Hoffenheim, whose billionaire owner -- SAP SE co-founder Dietmar Hopp -- has been a divisive force in German soccer.

The emergence of RB Leipzig, backed by energy drink maker Red Bull GmbH, is a more recent example of a shift in the fans-first culture that has led to it being dubbed a “plastic” club by rivals’ supporters.

“In general, German clubs are well run, and well supported commercially,” said Gardner. “Opportunistic investors have been keen to jump into German football.”