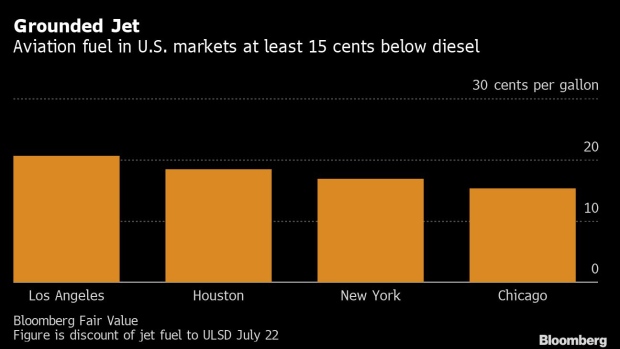 (Bloomberg) -- The U.S. is swimming in so much jet fuel that even this summer’s surge in air travel can’t save the market.

Air traffic in the U.S. has jumped to more than 2 million passengers a day, about 78% of where it was in the summer of 2019, according to the Transportation Security Administration. That’s done little to diminish the massive glut in jet fuel stockpiles, which stand at their highest seasonal level in a decade. Part of the problem is that refiners are trying to cash in on resurgent gasoline demand by raising production rates, which indirectly leads to more jet fuel output.

​The global oil market can’t fully recover to pre-pandemic levels until jet fuel consumption is back to normal. The U.S. has one barrel of jet fuel for every three barrels of diesel and every five barrels of gasoline in inventory, Energy Information Administration figures show, leaving the aviation sector exerting considerable influence on how much refiners can process.

“Traffic data is a false flag for the jet fuel market,” said Zachary Rogers, director of global oil service at Rapidan Energy Group. “The real metric is the quantity of international flights, which at this point has barely recovered, and there are looming headwinds.”

The best indicator of the market mismatch is the widening gap between jet fuel and diesel. Typically the two products trade within a nickel of each other but currently physical jet fuel is 18 cents a gallon less in the U.S. Gulf Coast refining hub. Most analysts say a 10-cent spread would point to the beginning of a recovery in jet fuel markets.

“Meeting gasoline demand meant swamping the market with jet fuel, which bled into the diesel pool, as refiners can only minimize middle distillate supplies to a certain extent,” said Linda Giesecke, manager of global fuels at ESAI Energy.

Most forecasts for the recovery in aviation place the return to pre-2020 conditions at next year or later. JPMorgan Chase & Co. analysts wrote in a recent note that world jet fuel consumption will be at 80% of normal after next winter.

Some airlines are still advising caution over the travel comeback, with Southwest Airlines Co. and American Airlines Group Inc. reining in optimism this week. The return of vital international business trips remains cloudy, with flights still restricted from much of Europe and the U.K. as the delta variant gains ground.

​The big gains in jet fuel demand already have been made, said Rebecca Babin, senior energy trader at CIBC Private Wealth, US. The market will continue to move toward firmer footing, but the rate of change may slow, she said.

“I feel like the market really is anticipating still significant improvements, and I think they might be a little smaller than that,” she said.