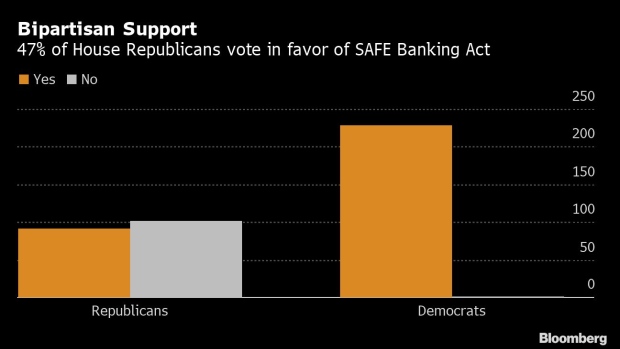 (Bloomberg) -- The advancement of the SAFE Banking Act indicates it won’t be long before U.S. stock exchanges open up to cannabis listings, a potential blow to Canadian bourses that have carved a lucrative niche for pot.

The U.S. House of Representatives voted 321-103 last week in favor of the Secure and Fair Enforcement Banking Act, which would allow banks to do business with legal cannabis companies. Currently, the industry is forced to conduct many transactions in cash because of its lack of access to the banking system.

The bill now faces the more difficult hurdle of the Republican-controlled Senate, but most industry analysts believe a version of it will pass by next year.

This would do more than allow U.S. pot companies to open accounts at deposit-taking institutions, said Jodi Avergun, a Washington-based partner at Cadwalader, Wickersham & Taft LLP.

Avergun pointed to Section 3 of the bill, which says transactions conducted by legal cannabis businesses won’t be considered proceeds of a crime under money-laundering laws. That won’t automatically open every institution to working with the cannabis industry, but it will push many of them in that direction.

“If it’s not money laundering, then that risk of prosecution goes away for investment banks, trading houses, the stock markets, all of those things,” Avergun said. “There are quite a few financial institutions that are close to the fence but not quite over the fence on their comfort in doing these transactions, and for those, this will push them over.”

This is particularly true for U.S. stock exchanges, which currently won’t list so-called “plant-touching” companies with U.S. operations because the drug remains illegal at the federal level.

“That’s exactly who’s going to look at Section 3 and say, ‘Wow, that really protects us, no one’s going to say that we’re committing money laundering,” she said.

That doesn’t bode well for Canadian bourses like the Canadian Securities Exchange, as well as some investment banks that have turned cannabis into a big business after the country legalized pot almost a year ago. Many American pot companies have expressed interest in moving to the New York Stock Exchange or Nasdaq when they can, and will likely prefer to work with the big U.S. banks as well.

How quickly the big U.S. banks will accept the pot industry is still a matter of some debate, however.

“I do think that a number of larger banks are going to embrace the cannabis industry, given the momentum in the space and the fact that they now have cover,” said Kevin Murphy, chief executive officer of New York-based Acreage Holdings Inc., which has a deal to be acquired by Canopy Growth Corp. once cannabis is federally permissible. “SAFE is a tremendous step in the right direction, and that is critical to more steps in that direction.”

Still, others believe the largest U.S. banks will avoid the sector for a while longer.

“Bigger interstate banks are likely to see the compliance headaches as not worth the benefit of entering the space,” said Cowen & Co. analyst Jaret Seiberg.

JPMorgan Chase & Co., Bank of America Corp., PNC Financial Services Group Inc., Toronto-Dominion Bank and KeyCorp have all said publicly that they won’t engage in U.S. marijuana banking due to federal law, and “passage of the SAFE Banking Act would be unlikely to alter their positions,” according to Bloomberg Intelligence analyst Nathan Dean. “We think most publicly traded banks would take a pass for the next several years.”