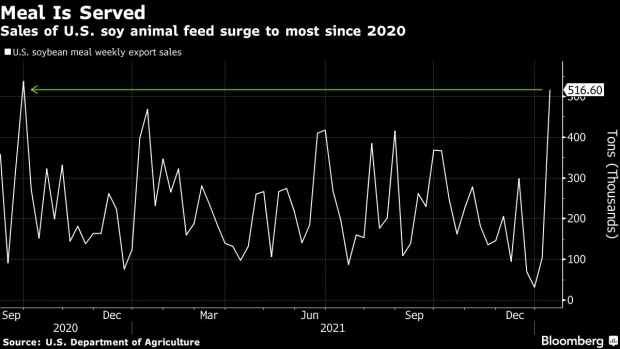 (Bloomberg) -- A big spike in U.S. soybean meal exports could be a harbinger of things to come, with rising demand for biofuel and feed pushing the American bean-crushing industry to expand.

The protein-rich commodity used to help feed pigs, chicken and dairy cattle last week saw its biggest U.S. export sales since September 2020, including a sizable shipment to Spain. That follows last month’s record pace of crushing soybeans, a process that produces both meal for animals and oil used for cooking and fuel.

U.S. soy meal production is expected to soar in the coming years as more fossil-fuel refiners jump on the “green” diesel bandwagon. With more plants prioritizing the soy oil to make such fuel, prices for soy meal could be driven down to make it more competitive with top global exporter Argentina.

The U.S. already sells a large amount of soy meal to Asian destinations such as the Philippines. Unlike soy oil, the meal isn’t as easily shipped from terminals focused on grains like corn, as it flows differently and can cake up. The bulky commodity also isn’t meant to sit around, adding to pressure to use or sell quickly.