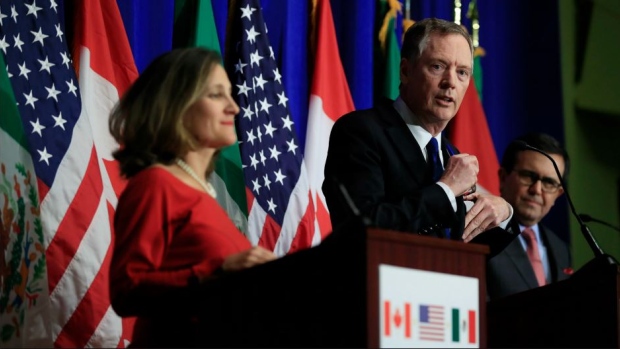 OTTAWA -- Business associations are warning that substantial tax changes in the U.S. could end up inflicting more damage on the Canadian economy than would the possible termination of the North American Free Trade Agreement.

While NAFTA's uncertain future remains a top concern for two of the country's biggest business lobby groups, they say much of their attention these days is also focused on the negatives of the recent U.S. decision to slash corporate taxes to levels comparable to those in Canada.

The warning follows on the heels of the Bank of Canada's first public estimate on the impact of the U.S. tax changes on the economy north of the border.

This week, the bank predicted NAFTA uncertainty and the tax reforms would encourage firms to divert more of their planned investments from Canada to the U.S., trimming half a percentage point off its Canadian investment projection by the end of next year.

Ministers from Canada, the U.S. and Mexico will gather next week in Montreal for the latest round of NAFTA talks. At this point, it remains unclear what NAFTA's fate will be and, if it indeed falls apart, what would take its place.

The U.S. tax changes, on the other hand, are a reality.

Business Council of Canada president John Manley said he believes the fallout from the U.S. tax changes on the Canadian economy could be even bigger than the negatives associated with the potential demise of the NAFTA.

"I think that's actually a very big risk factor -- almost as big, if not even in some cases bigger than NAFTA," said Manley, who served as a Liberal finance minister in the Chretien government.

"I think they are going to quickly need to think about what they do in the face of the U.S. tax reform. I don't detect any appetite for lowering Canadian taxes on business, but I would be very surprised if Mr. Morneau isn't already trying to figure out what he has to do about this."

Manley said NAFTA is a particularly big factor for business in areas such as the agri-food and the automotive sectors, given the extent to which the two economies are integrated. But for some other industries, any concerns about a few percentage points of tariff could be adjusted by exchange-rate movements in a single afternoon.

"Taxes are not the only thing, but we did have a significant advantage in corporate income tax rates over most jurisdictions in the United States," Manley said.

Canadian Chamber of Commerce president Perrin Beatty said the U.S. tax reforms should be a wake-up call to spur Canada into finding ways to make the country more attractive for both domestic and foreign investors.

It's difficult to know for sure how the significance of the tax changes compare to the end of NAFTA, Beatty said in an interview.

"But it is significant -- it was a serious factor before the Americans were able to pass tax reform," Beatty, a former Mulroney cabinet minister, said of the tax overhaul.

"I believe that urgently the federal government should be pulling together the provinces and municipalities to address this issue of the tax and regulatory burden -- and say, 'What can we do in Canada to ensure that we remain competitive?' "

Canada is headed in the wrong direction by driving up costs on businesses through recent changes such as tax reforms on private corporations, minimum wage increases and other regulatory hurdles, Beatty argued.

The federal government, meanwhile, continues to insist Canada has advantages such as an educated workforce and a very competitive tax rate among G7 countries, even after the U.S. reforms.

"Our government has been and will continue to carefully assess details of the bill south of the border, and we will consider its implications carefully," Chloe Luciani-Girouard, a spokeswoman for federal Finance Minister Bill Morneau, wrote in an email Friday.

"We will take time to fully understand and study the potential impact of this plan for Canada."

Tax expert Jack Mintz said the U.S. tax reforms pose a big challenge for Canada, but that it's too difficult to know at this point whether they'll have a bigger bite than NAFTA.

To remain competitive, Mintz said he thinks the government should consider lowering the federal tax to counter the new rates in the U.S.

Ottawa should also back off plans to introduce a controversial new tax change that limits the use of passive investment income by private corporations, Mintz added. The government says the stricter rules will only affect the top three per cent of the wealthiest incorporated individuals.

Mintz said he fears the change could encourage a number of people in venture capital and private equity to move their wealth outside Canada.

"It's time to put competitiveness on the front burner of public policy," said Mintz, a professor at the University of Calgary.