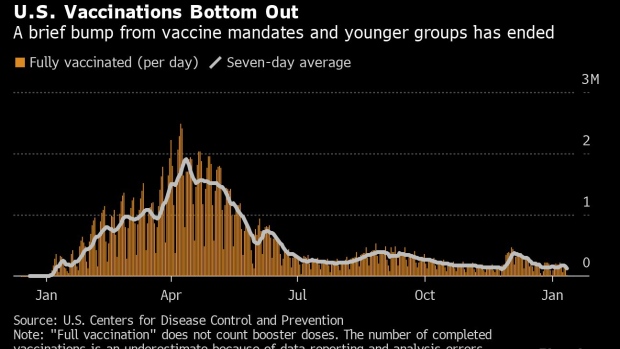 A healthcare worker administers a Pfizer-BioNTech Covid-19 vaccine at a vaccination site in San Francisco, California, U.S., on Monday, Jan. 10, 2022. California Governor Gavin Newsom is proposing a $2.7 billion Covid-19 emergency response package in his budget Monday to boost testing and its health-care system following a surge in cases caused by the omicron variant. , Bloomberg

(Bloomberg) -- The number of new people getting the Covid-19 vaccine is at one of the lowest points since the rollout began, according to a review of the latest U.S. government data.

While millions of doses are being administered each week, the majority of those are now booster shots for people who have already gotten their first round of injections. Vaccination rates are high in many major cities, but remain low in other parts of the country—with little sign of increase. And the Biden administration’s most potent tool to push vaccinations has been wiped out by the Supreme Court.

Significant errors in the U.S. Centers for Disease Control and Prevention’s vaccination data mean that any analysis is likely inexact: The number of people getting their first shot is overstated and those fully vaccinated are under-counted. But the broad trend points to a decline in new vaccinations and a large share of people not fully vaccinated in vast parts of the country.

Officials at the state and federal levels have tried everything from free beer, cash and impassioned pleas to get people onboard. In many places, they’ve succeeded. In New York City, for example, 74% of the population is fully vaccinated, according to the city’s health department. In Florida, the state reports that Miami-Dade County has a vaccination rate close to 90%. (Numbers from the CDC differ slightly from local reports, because of data errors and because the agency uses different population numbers to calculate percentages.)

But in other places, no amount of gimmicks or prizes, or the fear of getting sick, seems able to move the rates.

Most doses now going into arms are boosters, U.S. data show. On Jan. 13, about 387,000 boosters were given in the U.S., compared with 289,000 first or second doses, according to a seven-day average of CDC data. The divide is even sharper in less-vaccinated places. In Louisiana and West Virginia, about 60% of doses are booster shots and first shots are near their low points.

As rates stall, the government has lost its biggest tool to push them up again: The Supreme Court ruling Thursday will stop the U.S. government from enforcing a mandate requiring workers at large employers to either be vaccinated or face regular testing. It left in place a rule requiring health workers to get vaccinated.

The White House said it would work to persuade companies to enact their own, private mandates. President Joe Biden “will continue to call on businesses to immediately join those who have already stepped up, including one third of Fortune 100 companies, to institute vaccination requirements,” Press Secretary Jen Psaki said Thursday.

Not every company appears to be receptive. On Friday, General Electric Co. suspended its vaccinate-or-test policy after the ruling.

In many places with low vaccination rates, one of the biggest motivators to get inoculated has been fear, particularly amid surges of cases. Past waves of the virus have been followed by upticks in vaccination. During this omicron-driven wave, however, there is little sign of any corresponding surge of new vaccinations in those places.