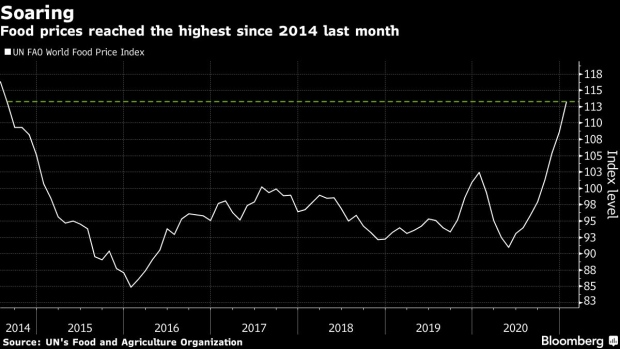 (Bloomberg) -- The United Arab Emirates is considering price controls on some foods, as soaring crop prices affect countries across the world.

The Persian Gulf nation could place price caps on chicken and milk, said Mariam Almheiri, the country’s minister of state for food and water security.

Global food prices climbed to the highest level in six years last month, according to a United Nations index. The surge has been driven by crop such as corn and soybeans, which are widely used to feed farm animals. That’s adding to food inflation worries for nations already strained after the coronavirus pandemic upended supply chains.

“We are studying this very carefully and we may need some adjustments,” Almheiri said in an interview, adding that they could apply to both local and imported products.

The potential move shows that even wealthy nations aren’t immune to inflation. The UAE, which is mostly desert and imports 90% of its food, allows its economy ministry to control prices, though such a step is rare.

Almheiri, who became a minister in 2017, is pushing ahead with improving the UAE’s food security through technology, innovation and diversifying sources of imports. The nation -- a federation of seven sheikdoms including Dubai and Abu Dhabi -- is encouraging local food production and investing in controlled-environment agriculture such as greenhouses, aquaculture and vertical farming, she said.

“We’re being flooded with a lot of requests to start growing food in the desert,” Almheiri said. “We’re now growing blueberries in the UAE, we’re growing quinoa, we’re growing salmon.”

The country, already a well-established logistics hub for Middle Eastern and global trade, aims to become a major center for food and agricultural technology, she said. It’s “very open” to lab-grown, or cell-based, meats and is assessing what regulations are required to allow for the sale of such products. It also wants to cut food loss and waste by 15% by the end of the year, and halve it by 2030, she said.