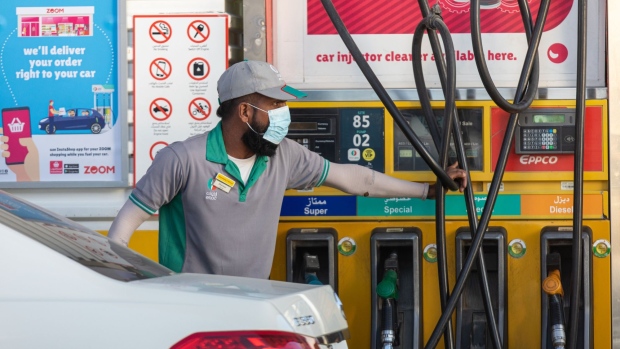 An attendant wears a protective face mask while using a fuel pump at an Eppco, also known as Emirates Petroleum Product Co., gas station in Dubai, United Arab Emirates, on Tuesday, March 10, 2020. The Middle Easts travel and business hub called on citizens and residents to avoid travel due to the coronavirus risk. , Bloomberg

The United Arab Emirates increased petrol prices for the fifth time this year, further widening a gap with other oil producers in the region who subsidize fuel.

The cost of fuel in the gulf nation, OPEC’s third-largest producer, has jumped about 80% since the start of the year amid a surge in oil prices. Crude has soared almost 50% this year to more than $100 a barrel, mainly because of the fallout from Russia’s invasion of Ukraine.

Other countries in the oil-producing region subsidize fuel to varying degrees, but the UAE deregulated prices in 2015. Petrol is now three times more expensive in the UAE than in Kuwait, and more than double the average price per liter in the six-member Gulf Cooperation Council.

The high cost of fuel has prompted ride-hailing company Uber Technologies Inc. to raise fares in the UAE twice this year.  “The price of fuel in the UAE is the highest and most expensive in the Gulf, and the graph is heading upwards,” academic Abdulkhaleq Abdulla said in a tweet on Friday.