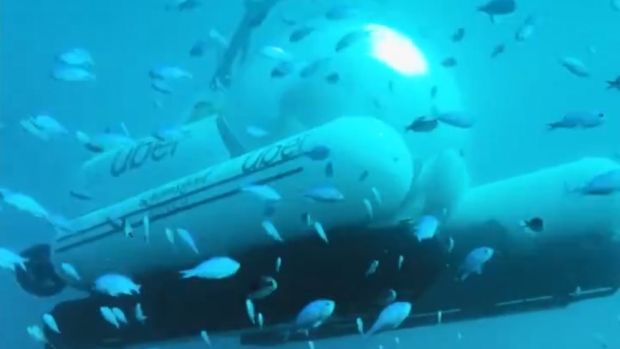 Want to get a fish eye’s view of the Great Barrier Reef but don’t have a boat?

The ScUber experience will be available from May 27 to June 18, initially from Heron Island off the coast of Gladstone in the Southern Great Barrier Reef region, and then from the coast of Port Douglas in Cairns from June 9 until June 18.

For $3,000 AUD (US$2,068), the experience includes a pickup and drop off from your location with the Uber app, then a helicopter ride to the launch point (either Heron Island or Port Douglas), a one-hour ride in the scUber submarine, and a half-day snorkel and tour of the Great Barrier Reef.

The submarine service is designed to support the protection of the coral reef system through Uber’s new partnership with the organization Citizens of the Great Barrier Reef.

Uber is no stranger to nontraditional marketing stunts, having previously ventured into ice cream delivery and a service called UberKITTENS, which allowed customers to request a playdate with kittens to support the PSPCA. The company is also working to develop a flying taxi through a partnership with Aurora Flight Sciences.

The submarine offering comes after Uber’sIPO flop May 11, with shares plunging immediately after the opening of trading and falling as much as 8.8% from its IPO price of US$45 per share by the end of its first day. Shares are still down about 10 per cent from the IPO price, amid flareups in U.S.-China trade negotiations and the recent dismal performance of rival Lyft Inc.