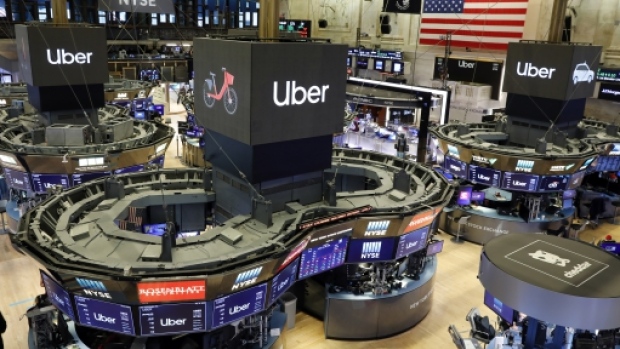 Investors betting that the bad times are over for Uber Technologies Inc. after a dismal trading debut will soon be able to express their views through an exchange-traded fund.

The US$40 million Renaissance IPO ETF, known by its ticker IPO, plans to add Uber to its holdings on May 17, according to a statement from Renaissance Capital. While new companies are typically included at scheduled quarterly reviews, the fund can buy firms with at least US$100 million of market capitalization as soon as five days after they start trading, said Kathleen Smith, manager of the fund.The ETF already owns Lyft Inc.

Although Uber shares rose Tuesday, the company is down almost 16 per cent since it started trading last week. While that’s prompted some analysts to question valuations, enthusiasm for unicorn listings is unlikely to sour given the potential rewards. Vegan burger maker Beyond Meat Inc. soared 163 per cent after its initial public offering, making history with the best first session for a company raising US$200 million or more since at least 2008.

“Uber will put the fear of God into pricing these other IPOs, maybe making them a little more reasonable for investors to own,” said Renaissance Capital’s Smith. “If you’re trying to trade names like Uber, it’s a lot safer to own a basket of them since it can be very volatile to own them individually,” she said, adding “it’s a way for investors to get exposure without the emotional ride.”

Both funds track indexes that can add new securities before they qualify for mainstream indexes. But while IPO plans to offer exposure to the most anticipated startup of the decade as soon as this week, FPX probably won’t buy Uber immediately, according to Josef Schuster, who designed the index behind the fund.

Instead, the fund will probably wait until the next rebalancing date because it already owns Lyft, which was the first of the two ride-sharing companies to come to market, he said. Eligible candidates can be added as soon as after the first trading day, but are typically added during the next quarterly rebalancing.

Still, the ability to add new IPOs to a fund’s holdings even on a quarterly basis is a value-add since it can take much longer for major indexes to include them. While the S&P Total Market Index permits some fast-track additions, companies must trade for at least 12 months before being considered for the S&P Composite 1500, the methodology shows.

For IPO, most companies are removed when they’re two years old. FPX also holds companies that are not newly listed, such as PayPal Holdings Inc., Verizon Communications Inc., and Hershey Co. The fund’s index includes spinoffs and firms that acquired a company that went public within the preceding four years.

“Spinoffs tend to be companies that are a little more well-established, well-known names, and they tend to be less volatile in many instances than new IPOs,” according to Ryan Issakainen, senior vice-president and ETF strategist at First Trust Advisors. “They do provide some diversification benefits from the IPO volatility.”

IPO has climbed about 30 per cent this year, more than doubling the returns of the S&P 500 Index. FPX is up about 20 per cent.