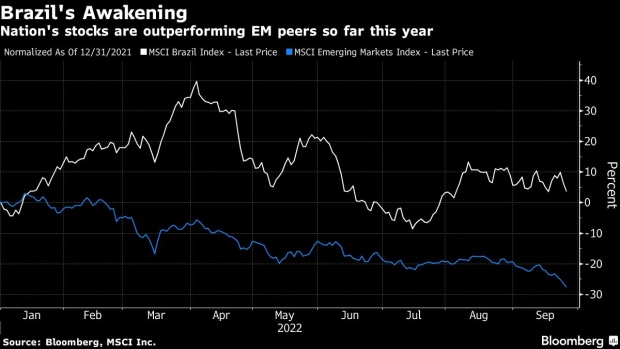 (Bloomberg) -- Brazilian stocks are poised to keep beating emerging-market peers due to strong growth in Latin America’s largest economy and odds the hotly anticipated presidential election in October will result in minimal policy disruptions, according to UBS Global Wealth Management.

“Brazilian equities have awakened this year,” the firm’s chief investment officer for emerging markets in the Americas Alejo Czerwonko wrote in a Sept. 22 note. The shares “should benefit from higher-for-longer commodity prices, very attractive valuations” that don’t reflect macroeconomic conditions and relatively low vulnerability to tighter global liquidity, he wrote.

Czerwonko expects stocks from the nation to outperform a key emerging-market benchmark by between 10% to 15% over the next 12 to 18 months.

Already this year, the MSCI Brazil Index has risen more than 4%, compared to a drop of 28% for the MSCI Emerging Markets Index. Still, the Brazilian stock gauge trades at 6.1 times forward earnings, well below its 10-year historical average of 11.2 times, according to data compiled by Bloomberg.

Investors have also “largely priced in” a victory by former leftist President Luiz Inacio Lula da Silva in next month’s election, according to Czerwonko. He expects any fiscal risks stemming from the election to be manageable thanks to the “balancing role” of Congress, regardless of the winner. Lula has been leading in almost all polls so far, with a BTG/FSB survey released on Monday showing his voting intention rise to 45% from 44% in a first-round vote, while President Jair Bolsonaro’s support remained unchanged at 35%.

Another trigger for Brazilian stocks should be the end of the country’s aggressive monetary tightening. Local traders are expecting the 11.75 percentage-point hike to be over, as policy makers led by Roberto Campos Neto were among the first to step up the fight against inflation. That “paves the way for the start of an easing cycle as soon as the first half of 2023,” Czerwonko says.