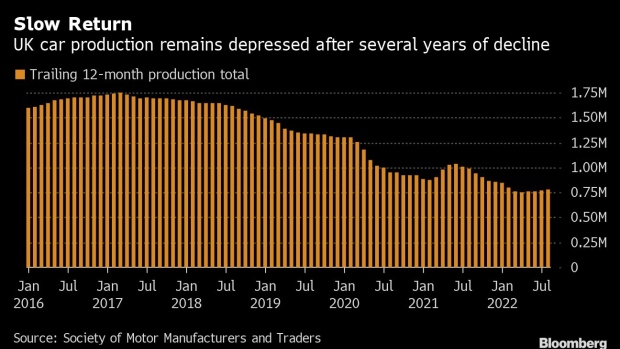 Newly manufactured automobiles parked at the Nissan Motor Co. plant in Sunderland, U.K., on Friday, Dec. 18, 2020. Nissan Motor Co. has opted to ship an upcoming electric vehicle to Europe from Japan rather than produce it in the U.K., where one of its largest factories faces existential risk from a hard Brexit. , Bloomberg

(Bloomberg) -- UK carmakers have seen energy costs jump by some £100 million ($108.6 million) this year, or 50%, fueling concerns among a majority of manufacturers over the future of their operations, a survey by the Society of Motor Manufacturers and Traders found.

The higher energy bills have led nine in 10 automakers to pass on rising costs to customers, while many have delayed or canceled major investments. UK auto output rose for a fourth consecutive month in August, though production remained 46% below pre-pandemic levels, the SMMT said Thursday.

The UK auto industry has been struggling for years, battered by crises ranging from Brexit to the Covid-19 pandemic. The global chip shortage that stymied production in the past two years is easing, but faster inflation and cooling economic growth present fresh hurdles.

“While another month of rising UK car production is good news, and testament to sectoral efforts to overcome supply chain shortages, it overshadows what is an extremely tough and uncertain environment,” said Mike Hawes, SMMT’s chief executive officer. “Volumes are down dramatically and firms are having to take drastic steps to safeguard their businesses in the face of myriad challenges.”

Almost a third of the cars made in Britain in August were either battery electric, plug-in hybrid or hybrid, as the shift toward EVs gathers pace. The production of battery electric vehicles more than doubled and now accounts for almost one in 10 cars produced, according to the figures.

Half of car manufacturers surveyed were worried about their ability to recruit staff at a time when the move toward zero-emission vehicles demands greater investment in the skills and technologies needed for the transition.