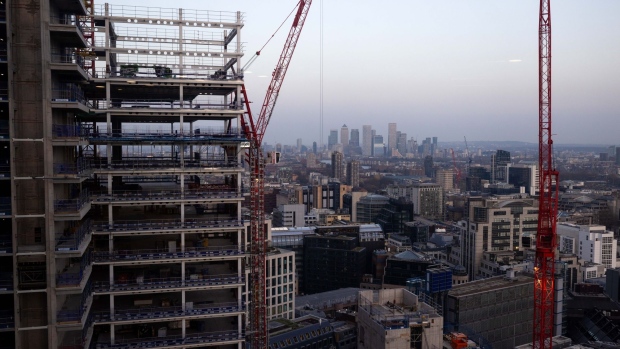 Skyscrapers in the Canary Wharf business, shopping and financial district on the skyline beyond a construction site in the City of London, U.K., on Monday, March 21, 2022. The U.K. is expanding the Financial Conduct Authority’s powers in a package of post-Brexit changes to the way it regulates the City of London. , Bloomberg

S&P Global Market Intelligence said its measure of business expectations fell to its lowest in more than two years despite an unexpected increase in output during September.

“The return to growth was fueled by delayed projects and easing supply shortages rather than a flurry of new orders,” said Tim Moore, economics director at S&P Global. “Forward-looking survey indicators took another turn for the worse.”

The report is the latest sign that the Bank of England’s moves to increase borrowing costs along with a surge in energy prices is eating into confidence about the outlook for the economy. S&P has warned that its surveys of purchasing managers suggest the economy may already be in recession.

S&P’s measure covering construction output rose to 52.3 in September, the first reading over the threshold indicating growth since June. Economists had expected the index to drop to 48 last month from 49.2 in August.

Homebuilding was the best performer last month, while civil engineering fell for a third month. S&P said the flow of new orders was its worst in 2 1/2 years, with construction companies noting customers were more risk averse.

The rate of inflation felt by building companies fell to its lowest since February 2021, reflecting an improvement in the supply chain issues that drove up prices earlier in the year.