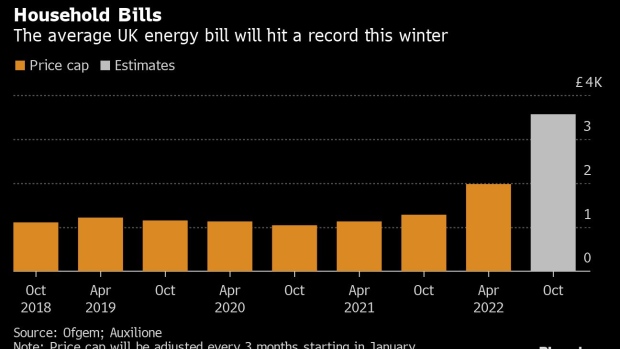 UK household energy bills are set to rise about 80% in October, when the regulator next lifts a limit on how much suppliers can charge in the wake of soaring wholesale costs.

That’s according to the latest estimate from consultancy Auxilione as the window closed for Ofgem to calculate what the cap will be. Average bills will likely near £3,600 ($4,292) a year when the new level is announced next week for the three-month period beginning in October, up from £1,971, which came into effect in April.

A rally in natural gas in the last year has been the main driver in raising household bills. UK wholesale gas prices jumped more than 15% this week alone, and are four times what they were a year ago. As that trend continues, bills could rise even further next year, deepening a crisis that could push millions into fuel poverty and force the next government to spend billions of pounds on support measures.

“UK and European gas and power prices continue rising to truly scary levels,” Rupert Harrison, portfolio manager at BlackRock Inc. and former adviser to then-Chancellor of the Exchequer George Osborne, wrote on Twitter on Friday. “The Government will have to act on a very large scale to support households, especially those on lower incomes - and also probably small businesses. The scale of this shock is hard to overstate.”

British energy firms this week urged the government to do more to help consumers with energy bills at a time when they’re also seeing food and fuel prices jump. The opposition Labour Party has demanded an early recall of Parliament to tackle the crisis and wants to freeze bills at current levels until April.

The October increase is set to come in shortly after a new prime minister -- either Liz Truss or Rishi Sunak -- will take office. Boris Johnson has vowed not to make any major new fiscal decisions that would hamstring his successor, and both Sunak and Truss have expressed skepticism about the opposition plan.

Ofgem’s cap puts a limit on the unit price that suppliers can charge households for energy. That level is then multiplied by the average annual energy use to come up with a figure that shows how much a typical household will likely pay in a given year.

The level is primarily based on wholesale energy prices observed during a certain period. Thursday was the final day for Ofgem to include those market prices in its next calculation, meaning that while there may be some small variation, Auxilione’s estimate is likely to be close to where the regulator sets the October cap.

Auxilione’s latest estimate puts the October price cap at £3,576. That will keep rising next year, hitting a peak of £5,856 in the second quarter.