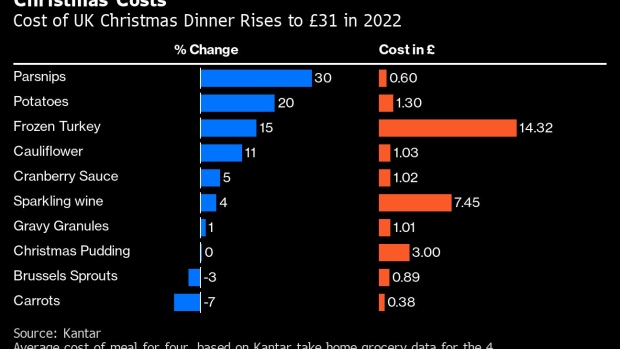 (Bloomberg) -- The cost of Christmas dinners in the UK have grown just over 9% from last year, slightly less than average grocery inflation, a fact unlikely to generate much Christmas cheer in households.

The rate of grocery price inflation saw its first drop in 21 months, falling 0.1 percentage points to 14.6% in the four weeks to November 27, according to figures published by Kantar today. The average cost of a Christmas dinner for four is £31, a 9.3% increase from last year, while Kantar estimate that throughout December shoppers will need to spend £60 more than last year to buy the same items.

Although Kantar predicts December is likely to be a record breaking month of grocery sales in value terms, the rise is due to higher prices, with reported sales volumes lower than 2021.