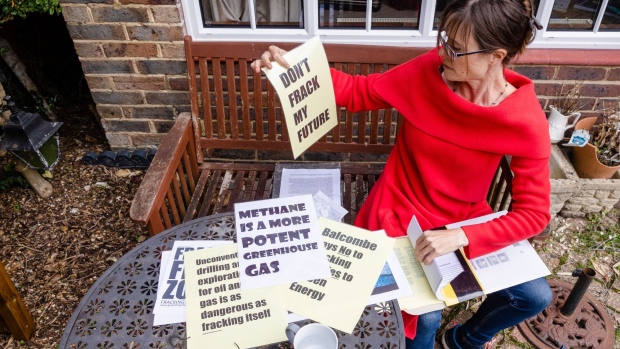 Cows graze in the fields surrounding the Cuadrilla Resources Ltd. exploration gas well site on Preston New Road near Blackpool, UK, on Saturday, Sept. 10, 2022. New British Prime Minister Liz Truss removed a ban on drilling for shale gas, an effort to boost domestic energy supply that will have to overcome the same obstacles that stymied the industry for the past decade. , Bloomberg

(Bloomberg) -- It’s been more than a decade since oil and gas drillers came to Balcombe, a village of fewer than 2,000 people in London’s affluent southern commuter belt. The only remaining evidence of their presence is an abandoned well site full of weeds, but the anti-fracking community that drove the industry away lives on.

That’s a problem for Prime Minister Liz Truss, who lifted a national moratorium on exploration for shale gas on Thursday. A key plank of her plan to ease the energy crisis rests on an industry that has had little success in getting anything out of the ground. And the local support that she has made a requirement for any new drilling is nowhere to be seen.

“I can’t understand why Liz Truss thinks it’s okay to lift a moratorium on fracking,” Helen Savage said on Wednesday in the front garden of her home in Balcombe. “Most communities, as soon as unconventional oil and gas comes knocking at their door, they start joining up to stop it.”

A national green light for fracking, the technique that triggered a huge boom in shale oil and gas in the US, is one of a handful of measures from Britain’s new leader to increase energy supplies in response to Russia’s invasion of Ukraine. It’s a controversial move that rolls back pledges made by her predecessor Boris Johnson in the government’s election manifesto.

“We will hang this broken promise round their necks in every part of the country between now and the next general election,” Ed Miliband, a member of Parliament and former leader of the opposition Labour Party said on Thursday. “You can’t escape a fossil fuels crisis by doubling down on fossil fuels.”

And from environmentalists to industry executives, there are questions about whether the policy will have any impact on the country’s near-term energy security, and warnings that it would divert resources from other measures that could cut carbon emissions.

In Balcombe, residents who have spent almost a decade opposing local extraction worry that the new government policy could bring back efforts to develop an oil well in their town. Chief among their concerns are potential contamination of local water supplies, noise from trucks and the impact on the climate.

Savage, 47 and a teacher, is one of a few hundred members of the Frack Free Balcombe Residents Association. In the summer of 2013, her village became the face of the country’s anti-shale-gas movement when protesters camped out for weeks to oppose a proposed extraction site.

Some tests on an oil well have taken place over the years, but the opposition has ultimately been successful. A local planning board rejected a test well application in 2021, possibly ending the site’s production potential for good.

Even after years of inactivity in the area, the idea of fracking remains toxic. At least one resident in the town center still hangs a poster in their window declaring a “Frack Free Zone.”

“Fracking is a bit of a dodgy character,” said Brian Barnett, 50, who’s lived in Balcombe for the last four decades and spoke to Bloomberg as he ate a lunch of cheesy chips outside the Half Moon Inn pub.

The opposition persists despite the fact that oil and gas companies said they would no longer need to use fracking in Balcombe, having discovered that the ground beneath the village has natural fractures and doesn’t require the technique to tap the oil or gas. But local residents nevertheless associate the well site with the controversial technology.

Cuadrilla Resources Ltd., a partner in the Balcombe site along with Angus Energy Plc, made the country’s first major shale gas discovery in northern England. It remains one of the industry’s main proponents, yet Chief Executive Officer Francis Egan said fracking is no solution for the current energy crisis.

“Nothing is going to contribute to gas bills this year or next year,” Egan said in a phone interview. “There will be a deficit of gas supply for quite some time.”

Cuadrilla’s well site in Lancashire would be the quickest option to restart British fracking, said Egan. The company has already drilled two horizontal wells at the site near Blackpool and could complete tests in three to six months to start pumping gas there, he said.

Production on the kind of scale that could help alleviate the current crisis would take much longer.

Yet even without the ban on fracking, Egan said other rules make it almost impossible for Cuadrilla to operate. Restrictions on seismic activity are the main roadblock, with a requirement to halt fracking if a there’s a tremor of 0.5 on the Richter scale. Egan said the industry should be regulated like other extractive industries that aren’t hindered by seismic readings.

UK Business and Energy Secretary Jacob Rees-Mogg said in Parliament Thursday that seismic limits would need to be reviewed to allow gas extraction to take place.

In a government-commissioned report released on Thursday, the British Geological Survey concluded that it has a limited ability to evaluate and mitigate risks of seismic activity caused by fracking. That’s particularly true in the UK where there is scant data compared with the US, where the technique has been used on a large scale.

The report found that fracking “can trigger earthquakes large enough to cause structural damage.” Truss has said the government will not allow fracking if it “carries a risk.”

But in a statement announcing the policy change, Rees-Mogg said “tolerating a higher degree of risk and disturbance appears to us to be in the national interest.”

Anti-fracking groups have already started to protest in Lancashire since Truss’s initial announcement that she would lift the moratorium. It may become an even greater political issue after Rosie Cooper, the area’s Member of Parliament and a fracking opponent, announced she would step down for another job earlier this week, triggering a by-election. The opposition Labour Party, of which Cooper is a member, has already come out against fracking, saying the practice won’t do anything to reduce bills.

The public perception of the shale gas industry could be solved if local people see their energy bills reduced by fracking, Egan said. In Balcombe, that argument is already flopping.

In response to the fossil fuel industry’s plans, residents started a cooperative called Repower Balcombe that has installed solar panels on five schools and a barn, according to Malcolm Kenward, a member of the group. The projects offer shareholders a 5% annual return and discounted energy to the sites where they’re located.

“If a small little group of villagers can do that, why do we have oil and gas companies spending millions doing exactly what’s not needed?” Kenward said. “That money would be better spent in renewable energy.”