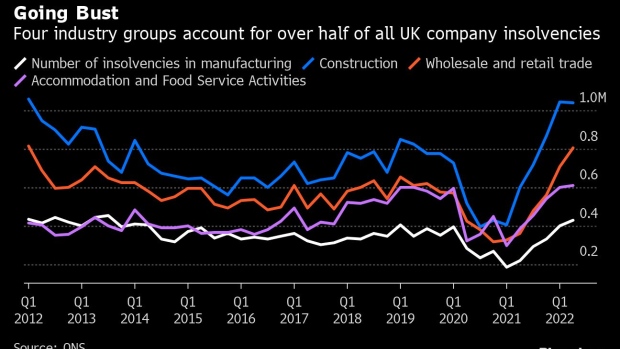 UK corporate insolvencies in the second quarter reached their highest since 2009, with the soaring cost of energy cited as a primary concern for more than a fifth of companies.

The figures released by the Insolvency Service and the Office for National Statistics show that more than 1-in-10 firms questioned in August reported a moderate-to-severe risk of failure.

Analysis of the data from the ONS on Friday shows that just four industry groups accounted for over a half of all insolvencies in England and Wales in the first half of this year.

Those were construction, manufacturing, accommodation and food services, along with wholesale and retail. In each case, natural gas now accounts for a significantly larger share of total hydrocarbon-fuel use than it did a decade ago.

Higher gas and raw material costs fueled by Russia’s invasion of Ukraine have contributed to inflation reaching its highest level in decades, as firms are forced to raise prices in an effort to protect their margins.

Some 22% of businesses said energy prices were their main concern in August, an increase from 15% in late February, the ONS said, citing surveys it has carried out. For small firms -- those with 10 to 49 employees -- the figure was 30%.