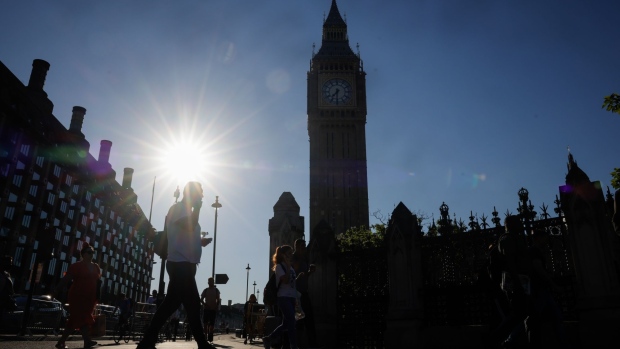 Commuters pass the Houses of Parliament in London, UK, on Monday, July 11, 2022. UK Prime Minister Boris Johnson quit as Conservative leader last Thursday after a dramatic mass revolt from his ministers, following a series of scandals that have overshadowed his three-year premiership. Photographer: Jason Alden/Bloomberg , Bloomberg

(Bloomberg) -- UK recruitment companies reported the slowest increase in hiring in 17 months as businesses grow more cautious about the outlook for the economy.

The Recruitment & Employment Confederation and KPMG said said its measure of demand for both permanent and temporary staff continued slowing, and new vacancies cooled to a 16-month low.

With inflation forecast to hit double digits later this year, businesses are increasingly wary about the outlook. Rising costs are weighing on consumer behaviors and increasing the risk of a recession this year.

“Given the challenging economic outlook, employers are rightly hesitant about their hiring plans, said Claire Warnes, head of education, skills and productivity at KPMG, which helped conduct the survey. “A lack of suitable candidates and an overall skill shortage in most sectors are keeping starting salaries high.”