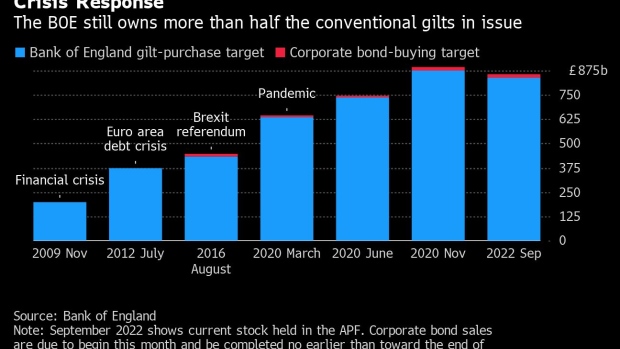 A worker crosses the road outside the Bank of England in The City of London, UK, on Monday, Aug. 15, 2022. The Office for National Statistics are due to the release the latest UK Labor Market Statistics on Tuesday. Photographer: Jason Alden/Bloomberg , Bloomberg

UK Prime Minister Liz Truss’s new government has looked at changing the Bank of England’s money-printing program to save the UK taxpayer billions of pounds at a time when the public finances are under increasing strain.

Under the option, interest paid on some deposits held by commercial lenders at the BOE would be scrapped, potentially saving more than £10 billion a year, based on calculations with the benchmark interest rate at 2.5%.

The government has looked at the option and Truss is “aware” of the potential financial benefit, said Gerard Lyons, her external economic adviser. The prime minister has already unveiled a costly energy support package for households and businesses, and her chancellor, Kwasi Kwarteng, is due to outline details of planned tax cuts on Friday. The measures, which could cost up to £200 billion, will add to the swollen budget deficit.

The issue of “interest on reserves” has risen up the agenda because the government will soon be making payments to high street banks due to the way the BOE’s quantitative easing mechanism operates.

As part of the £895 billion QE program, an equivalent amount of reserves -- deposits held by commercial lenders at the BOE -- were created. The central bank pays interest on those, a cost that was initially more than covered by income earned on government bonds bought by the BOE with the money it created.

That equation has changed now that interest rates are rising, prompting the government to consider a revamp.

“It gets more attractive to go down this route the higher interest rates go,” said Lyons, chief economic strategist at online wealth manager Netwealth. “These are two really savvy people,” he added, referring to Truss and Kwarteng. “But the fact they are aware does not mean they are going to make it policy.”

Once the BOE’s benchmark interest rate is around 2.25%, the interest paid on reserves will be greater than the income from gilts and, under the QE indemnity with the Treasury, the government will start transferring funds to the BOE.

Those taxpayer funds will in turn be passed to commercial lenders. The transfer is imminent because the BOE is expected to raise rates from 1.75% to at least 2.25% on Thursday. The Treasury declined to comment.

While banks say a change would amount to a stealth tax, any such complaints may not get much traction given the number of benefits in the pipeline for the sector. In addition to a lower corporation tax, Truss’s government plans a program of deregulation and is considering scrapping a cap on banker bonuses.

The UK isn’t alone in reviewing a possible change to interest on reserves. Last month, Bank of France Governor Francois Villeroy de Galhau said the combination of the “massive excess liquidity” created by QE and rising interest rates “would provide a sizeable risk-free income to the banking system and a similar loss” for central banks.

For the UK, one proposal to reduce the cost to the state is “tiering,” under which some reserves would be ring-fenced and earn no interest. Zero-rating the £450 billion of QE during the pandemic would save around £10 billion a year with BOE rates at 2.5%, equivalent to almost 2% on income tax.

Jonathan Pierce, a banking analyst at Numis in London, estimates that the net annual taxpayer transfer will be around £17 billion if BOE interest rates hit 4%. Traders are betting that UK rates will rise to 4.5% by the middle of next year. He expects the UK will introduce tiering, under which “a portion of reserves would attract a 0% rate, with marginal balances continuing to receive base rate.”

BOE Governor Andrew Bailey has said the arrangement would effectively be a tax on the banks and is therefore a decision for the Treasury.

Targeting the £450 billion of reserves would slash UK commercial bank profits by 25%, Pierce estimates. At £10 billion a year, the loss of income would be more than the banking industry payments in corporation tax, the bank surcharge and bank levy in 2021 combined, according to figures from PWC and UK Finance.

Yet, the savings would likely be much welcomed by Truss amid questions about the funding for her economic proposals.

Michael Forsyth, who led the House of Lords Economics Affairs Committee review into QE last year, said that for the government “it is a honey pot, maybe one too tempting to resist.”