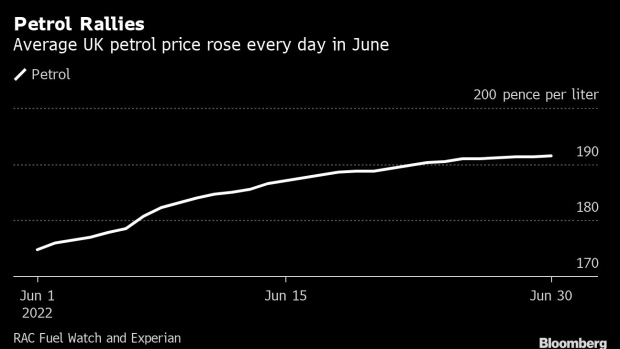 (Bloomberg) -- UK petrol prices rose by the most ever per liter for the month of June amid soaring inflation and a cost-of-living crisis that’s gripping the country.

The average cost of petrol at the pump increased 16.59 pence ($0.20) a liter last month, surpassing the record of 11 pence set only this past March, according to data from the RAC motoring organization. The price rose every day in June, reaching a record 191.43 pence on June 30.

“The rate at which pump prices have been rising over the last four weeks is hard to comprehend,” said Simon Williams, a fuel spokesman for RAC. The group called on the British government to implement more financial support, following a 5 pence fuel-duty cut in March.

Prices for diesel also rose to just under £2, RAC data showed. The increases have come despite wholesale fuel prices dropping for the past five weeks, the group said.

The UK has the most expensive fuel of any of Europe’s five-largest economies, according to data complied by Bloomberg. The cost of filling the tank of a 55-liter family car was £105.29 -- an increase of £25 from the start of the year, RAC said.

“There’s no doubt that drivers are getting an incredibly raw deal at the pumps at a time when the cost-of-living crisis is being felt ever more acutely,” Williams said in the statement.