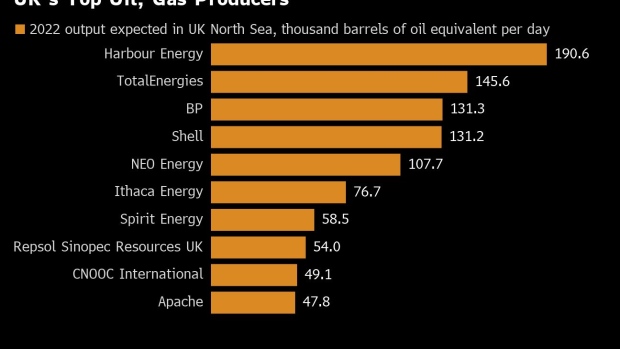 (Bloomberg) -- Oil and gas exploration and production companies in the North Sea are set to miss out on billions of dollars of cash after the UK implemented a windfall tax on energy firms to tackle the rising cost of living.

Despite the hit, the bank retained a buy rating on the firms as higher oil and gas prices still means the three firms’ free cashflow levels will be more than 60% higher than their combined market capitalization based on current commodity forward prices.

The UK government announced May 26 that it would impose a 25% windfall tax on oil and gas companies to help those being crippled by soaring energy costs. The measure also includes an 80% new-investment allowance that means energy companies can reduce the amount they pay if they commit to fresh capital expenditure.

The North Sea was once dominated by Big Oil firms such as Shell Plc and BP Plc, but these have increasingly retreated from the area’s maturing fields. Private equity-backed firms, including Harbour and NEO Energy, have in turn gained ground, with the former now the biggest producer in the UK North Sea.

The impact on Shell and BP will be less severe as their UK North Sea operations represent less than 10% of their operations, according to Kpler analyst Johannes Rauball.

“This stands in contrast to what we see developing for smaller independent producers who rely heavily on revenue generated from operations within the UK North Sea and should therefore come increasingly under pressure,” he said.

Still, BP has said it will review its investment plans in the UK, while Shell said the levy “creates uncertainty about investment in North Sea oil and gas for the coming years.”

Since the government made the announcement, Harbour’s shares have fallen by 13%, EnQuest’s dropped 18% and Serica’s by 21%. That compares to the StoxxEurope 600 Oil & Gas Index, which is down 0.9% since May 25.