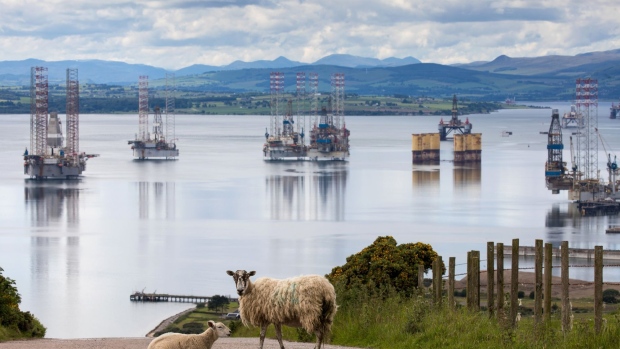 Bloomberg Best of the Year 2020: Sheep on a road in view of mobile offshore drilling units in the Port of Cromarty Firth in Cromarty, U.K., on Tuesday, June 23, 2020. , Bloomberg

(Bloomberg) -- Boris Johnson’s government is considering plans to impose a windfall tax on energy producers including oil and gas firms and electricity generators, to try to help Britons struggling with a cost-of-living crisis.

Chancellor of the Exchequer Rishi Sunak is drawing up options for a levy but no final decisions have been taken, according to two people familiar with the matter who spoke on condition of anonymity. Officials are examining the approaches taken in European Union countries including Spain and Italy, where similar such taxes have been introduced, one of the people said.

Johnson’s government is facing intense pressure to to tackle a record squeeze on living standards, which has been exacerbated by soaring energy prices in part due to Russia’s war in Ukraine. Still, both Johnson and Sunak have repeatedly said they are instinctively opposed to a windfall tax over fears it would deter future investment, but they haven’t ruled it out.

Sunak said this month he wanted to see energy firms investing their profits in new jobs and Britain’s domestic energy security. He warned that if they didn’t “at significant scale” then “no option is off the table.”

“We understand that people are struggling with rising prices,” the UK Treasury said in a statement, when asked about the prospect of windfall taxes. It also reiterated the government’s long-held position that the issues facing Britain are global, and that ministers have already rolled out support including a council tax rebate.